A Feminist Perspective on Trumpcare

Rife with problems and gender bias 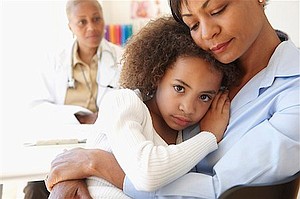 Although the American Health Care Act (AHCA) of 2017 is rife with problems, one of the most disturbing is its shocking gender bias. But why should we be shocked that the AHCA, or “Trumpcare,” privileges males, as it was crafted by a group of privileged males and is being championed by the most privileged of all, Donald Trump himself?

The House bill now goes to the Senate, where majority leader Mitch McConnell initially convened a healthcare working group composed of 13 men. Amidst criticism, they invited Sen. Shelley Moore Capito (R-WestVirginia) to join, although it is not clear that she will be a regular contributor.

The fact that 13 men, and a woman who may or may not be a regular contributor, are crafting this bill is not the issue, but rather that the architects of the AHCA are treating women as second-class citizens while taking care of their own interests.

While the AHCA maintains the federal provision requiring that insurance companies provide coverage to people regardless of their medical history, states will be allowed to seek a waiver from the federal law. An amendment to the bill appears to allow insurers to charge people more if they have certain pre-existing conditions or even to deny them coverage entirely.

There’s an exhaustive list that penalizes women. Rape and sexual assault themselves are not listed as pre-existing conditions in the proposed bill, yet the most common physical and emotional effects can be used to deny health insurance coverage to women under the proposed law. Research is clear that victims of sexual assault suffer higher rates of HIV and other sexually transmitted infections, depression, anxiety, eating disorders, and sleep disorders—all on the proposed list of pre-existing conditions.

Victims of domestic violence often struggle with these same things. Given that approximately one in six women are sexually assaulted and 30 percent experience domestic violence, the potential impact is huge.

If you have troublesome periods or menstrual irregularities, expect your premiums to go up. Pregnancy and the need for a C-section are also on the list of pre-existing conditions, and premiums for women who have given birth might be as much as four times higher than for men. In case it’s not yet clear – only women menstruate and get pregnant.

The bill would also allow insurers to opt-out of what Obamacare considered the 10 essential health benefits, or services that all insurance plans must cover. These include maternity and newborn care, preventive care like mammograms, cervical cancer screenings, birth control, and access to free or low-cost breast pumps. Before Obamacare, 62 percent of healthcare insurance plans available on the individual market did not cover maternity care, and only nine states mandated maternity coverage.

The AHCA will defund Planned Parenthood for one year and blocks that agency from receiving Medicaid reimbursements. That essentially eliminates birth control access and sexually transmitted infection screenings for an estimated 390,000 low-income women. About half of the 2.5 million patients who visit Planned Parenthood centers every year rely on Medicaid for their health coverage.

The champions of Trumpcare really don’t seem to get it. Or maybe they do, and just don’t care. Rep. John Shimkus questioned why men have to pay for prenatal care, while White House press secretary Sean Spicer even joked that older men didn’t need maternity care. Funny? Not so much.

At the same time, the architects of the bill deliberately left erectile dysfunction off the list of pre-existing conditions. So, being a woman is a chronic medical condition that must be controlled by men but getting an erection (or not) is protected. If we ever needed more proof that men think with one head more than the other, look no further.

This healthcare bill will continue to entrench male superiority, to the detriment of more than half of the country’s population.

Laura Finley, Ph.D., teaches in the Barry University Department of Sociology & Criminology and is syndicated by PeaceVoice.