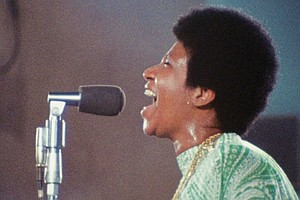 The career of journalist Mike Wallace, best known for his hard-hitting interviews on "60 Minutes," is the subject of "Mike Wallace is Here." For decades, Wallace was everywhere, the quintessential dogged interviewer; indeed, the film opens with an exchange between him and Bill O'Reilly in which the latter claims to have been inspired by Wallace and, indeed, to have beaten him at his own game. (Wallace, in his 90s by that time, appears entirely unimpressed.) Although director Avi Belkin grew up in Israel and is too young to have consumed "60 Minutes" at its height in the 70s and 80s, he nevertheless correctly discerned that Wallace's career is a fascinating vantage point for reflecting on the ways that television journalism has changed in the decades since its advent. Working from more than 1700 hours of footage, Belkin assembles a compelling case that this hard-driving, prickly personality may well have been driven by insecurities and an outsized ego and may not have been a favorite of his colleagues, but also worked with a kind of integrity that is increasingly hard to find, inspired by an actual desire to know the answers to the hard questions he posed. The interviews sampled here are riveting--with notoriously difficult world leaders like Ayatollah Khomeini and Vladimir Putin and outsized personalities like Leona Helmsley, Oprah Winfrey, Shirley MacLaine, and a young Donald Trump--and occurred in a context in which media companies appear to have been more prepared to defend independent efforts to get past pat answers to more difficult truth (in contrast to now, when so much of the media is corporately connected to its subjects). Although definitely not a contemplative figure, Wallace emerges as someone who used his questions of others to interrogate his own views. The film will be released theatrically in July.

Ninety-year-old Dr. Ruth Westheimer was present for the screening of "Ask Dr. Ruth," the immensely entertaining film about her life--and that is hardly surprising once you get a sense of how absolutely irrepressible she is. People less than half her age can scarcely keep up with her, and this investigation into her life story both reveals her buoyant persona and grounds it in a history that is quite full of loss and suffering. The only daughter of very loving Orthodox Jewish parents, Westheimer was sent away to a Swiss orpahnage at the age of 10 to save her from the threat of deportation by the Nazis and, after two years of correspondence with them, never saw her parents again and later learned they had been murdered, likely at Auschwitz. The film employs quite effective animated sequences to depict her early seminal experiences at the Swiss orphanage, where the Jewish children were treated as a servant class and Jewish girls were not allowed to attend high school. We meet her first boyfriend and learn about her own emerging consciousness, while also exploring her surprising leap to fame in the relatively prudish 1980s as a sex therapist who was both controversial and quite beloved for her easy frankness. Still quite active as a writer, speaker, and public personality, Westheimer appears to have no time for fear or regret, only enthusiasm. The film will be released theatrically on May 3 and will appear on Hulu in June.