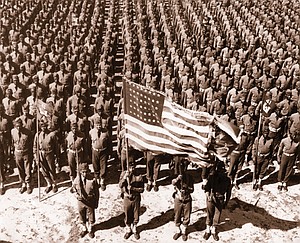 Despite being treated as second-class citizens at best, African Americans bravely served the United States in times of war. While World War II was no different, some of the most important work that African Americans were doing to support their country took place far away from the battlefield. You can learn about that work at The National WWII Museum’s special exhibit, Fighting for the Right to Fight: African American Experiences in World War II, now on display at the Oregon Historical Society, where you can also learn about the brief history of Vanport —a city that not only helped rebuild the United States Navy, but helped integrate the state.

Vanport doesn’t exist anymore, and by the time it was destroyed in 1948, many Oregonians wished it didn’t exist, seeing the city as a ghetto for the people too black or too poor to live in Portland. But from 1942 to 1945, Vanport was America’s largest wartime housing project, home to thousands of Kaiser Shipbuilding Company laborers. At its height in late 1944, roughly 42,000 people lived there, making it Oregon’s second-largest city.

During World War II, two of the Kaiser Shipyards were in Portland, with a third across the Columbia River in Vancouver. The three facilities produced almost half of the nearly 1,500 ships built by Kaiser from its founding in 1939 to the war’s end. Thousands of people moved to Portland and Vancouver for work, but the cities lacked the space to handle the population boom. To accommodate the new workers and their families, Vanport was built in just four months.

Many of these workers were African Americans leaving the South. An estimated 6,000 of them lived in Vanport in its peak years, giving the city one of the highest percentages of black residents outside the South—comparable to Detroit and Chicago—a fact made all the more surprising given Oregon’s history. Years before it joined the United States, in 1859, Oregon passed a series of black exclusion laws forbidding African Americans from settling there. Like the Jim Crow laws of the South, these laws remained on the books until decades after the Civil War. Before Vanport, African Americans constituted less than one percent of Oregon’s population.

The Kaiser Shipyards closed after the war ended, and when the jobs left, so did many of Vanport’s residents. The city’s population had fallen by nearly half by 1947; more than one quarter of those who remained were African Americans, shut out of Portland by discriminatory housing practices. An Oregon Journal article published that year claimed that Vanport’s “large colored population” made it “undesirable” to many Oregonians, but conceded that “as long as over 20,000 people can find no other place to go, Vanport will continue to operate whether Portland likes it or not.”

On May 30, 1948, Vanport was washed away in a sudden and catastrophic flood. In the aftermath, many of the displaced African Americans resettled in Portland’s Albina District. The neighborhood was one of the few areas not off-limits to them, but it was densely populated by the city’s preexisting black population.

It’s difficult to tie Vanport’s legacy to the Civil Rights Movement that would follow. But looking across the broad sweep of American history, Vanport is emblematic of how African Americans were willing to defend the freedom that they were denied, at home as well as abroad.

The National WWII Museum’s special exhibit, Fighting for the Right to Fight: African American Experiences in World War II, will be displayed at the Oregon Historical Society through Jan. 12.

Jacob Nierenberg graduated Stanford University with a bachelor’s degree in American Studies, focusing on race and dissent in post-WWII America, and a master’s degree in Journalism.