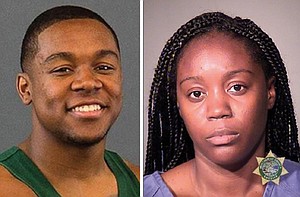 According to court documents, Portland Police responded to reports of a shooting at approximately 2pm on Friday in the 6200 block of Northeast 42nd Avenue.

When officers arrived, they located Deante Strickland suffering from a gunshot wound to the chest and died just north of the residence.

Two others, a 25-year-old woman and a 67-year-old woman, who were also Strickland’s relatives, were transported to the hospital after being found by police with gunshot-related injuries.

The 25-year-old, who is Strickland’s cousin, told police she heard gunshots while in the bedroom of her residence, where the 67-year-old woman and Deante and Tamena Strickland were located. When the 25-year-old approached the living room, she saw her cousin, Tamena Strickland, direct a silver handgun in her direction and shoot her. Both of the two injury victims are expected to recover.

Tamena Strickland surrendered to Portland Police with her attorney at around 7pm that evening and officers also found a black gun box on the front passenger seat floorboard in a vehicle associated with the alleged suspect.

Deante Strickland was slated to play for PSU’s football team after playing two seasons of basketball with the Vikings. He earned a degree in June and was preparing to compete in football in his fifth year, for graduate school.

“We are all deeply saddened and grieving about this tragic news,” said Viking Basketball Coach Barret Peery, who recruited Strickland back to his hometown in 2017, a statement from PSU said.