Village Gardens a new resource for fresh and healthy 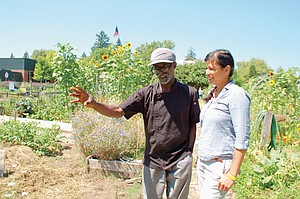 A local non-profit is taking a unique approach to connecting low income communities to fresh, healthy food by facilitating both a community garden and a grocery store that sells its produce, providing access for community members to grow their own food and discounts in a retail setting for its low income customers.

Village Gardens was established in 2001 by community leaders in the St. Johns Woods apartments (now called Cathedral Gardens Apartments) and organized with Janus Youth Programs’ support. In addition to the community garden, which serves about 80 gardener families, an orchard of about 50 fruit trees is co-located at the site, and the harvests from the garden and orchard serve about 400 people per day in the grocery store.

Ev Tapio, the farm manager for the non-profit Village Market, located at 4632 N. Trenton St., stocks fresh produce from the organization’s community garden a block and a half away, which provides much needed nutritional food at affordable prices to diverse and low income customers.

“For the most part, it doesn’t get any more local than a block and a half away,” added Charles Robertson, Village Gardens’ prepared foods manager, referencing the close proximity the grocery store, located near the corner of North Trenton Street and Newman Avenue, is to the garden, just a short walk to the east.

The outreach comes as low income communities experience a worsening access to healthy foods, particularly in the last half century, a trend that’s occurred locally and across the nation, Robertson said. Research also suggests racial and ethnic disparities prevail when it comes to the availability of fresh food grocery stores serving lower income neighborhoods.

“That’s making these communities the hub of diabetes and unhealthy eating habits,” he said.

Robertson has been involved with Village Gardens since 2008, about the time the grocery store component of the organization was being established, and was integral to getting that program off the ground through grant writing and organizing. That occurred in response to the closure of a for-profit grocery store in the neighborhood, leaving low income residents few healthy options for food.

The operators of the former store also had a mission of servicing low income customers and had about a third of the store’s sales come from the Supplemental Nutritional Assistance Program (SNAP) and Women Infants and Children (WIC) beneficiaries, Soebroto said. But a pattern emerged where customers would run out of benefit dollars to spend on fresh produce near the end each month, causing the store to stock less in those items.

Village Gardens Prepared Foods Manager Charles Robertson was integral to the non-profit’s establishment of a food market back in 2008 with his grant writing and organizing, and has been involved with the Janus Youth program in north Portland ever since.

To combat that problem, Village Gardens launched its Good Food program, which enables self-identifying SNAP and WIC eligible customers an additional 20 percent discount in all fresh, frozen, and dried produce. In addition, those benefit-recipient customers’ purchases earns them points toward future discounts—for every $50 spent in SNAP or WIC benefits, they receive $5 of free produce.

Now, Soebroto said, the store is stocking produce high throughout the month.

“That’s a real game-changer. More than a game changer, that is a life-changer. Because we went from people just doing junk food…if you can imagine junk food throughout the month to actually having higher sales in produce throughout the month, that’s a real life changing event,” Robertson said. “We’ve achieved what we hoped to achieve….just helping change people’s eating habits.”

Since 2016 the Good Food programs provided a total of $72,243 in incentives and fresh produce to customers, Village Gardens’ website stated.

The program’s success is in part thanks to support from city, county, federal, and charitable donations. Village Market does not stay afloat through grocery sales alone, relying on the support they receive from community partners like the U.S. Department of Agriculture nutrition incentive program, The Portland Children’s Levy, Home Forward, CareOregon and the Siletz Charitable Foundation.

Also, as part of its pledge with supporters, the store has agreed to stock culturally relevant, affordable healthy food, and agreed to not sell alcohol or tobacco. In addition, about nine out of 10 of the store’s staff is local residents.

In addition to being a hub for healthy food for diverse and low income communities in north Portland, Village Gardens also provides a gazebo in the garden for community gatherings, such as the potluck held during City Commissioner Jo Ann Hardesty’s visit to the non-profit last month.

Soebroto likes that the store benefits the neighborhood and invites them in for a direct-from-the-source experience like no other.

“Last year I think we were out of like mustard greens or something in the market and someone…took the customer down to the garden, harvested them, and sold them. We get to sell green tomatoes, which you can’t get in a grocery store, and folks are super excited, they’re peeking over the garden and asking for green tomatoes. We get to just be immediately responsive.”

In addition, an outdoor gazebo in the garden serves as a community gathering space. A potluck held amongst neighbors last month welcomed a visit from City Commissioner Jo Ann Hardesty.

Village Gardens accepts volunteer work, provides leadership opportunities, and any local vendor interested in selling their product in the market can get in touch with them at 503-548-0374.