Back to School Bus Safety Urged

First Student has some tips as class bells ring 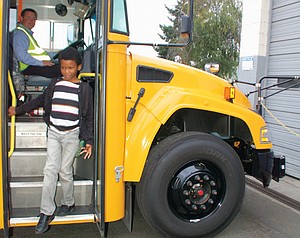 School bus safety is the focus of Mike Hamel, general manager for the bus company First Student, as students, parents, and motorists alike prepare to adjust to the ring of the class bell bringing more buses on the road and students walking to bus stops and school.

Hamel told The Portland Observer his important message for kids, drivers, and pedestrians alike is to keep in mind that riding a school bus is the safest way for children to get to and from school.

First Student Area Manager Mike Hamel gets the word out about school bus safety tips for students, their parents, and motorists in preparation of the school year. He manages the bus barn at 6755 N.E. Columbia Blvd.

Even with the many safety features a bus has, like its signature iconic yellow paint which has been around since 1939 and its warning lights, those features mean nothing if motorists don’t take heed.

“Yellow flashing lights mean slow down, the bus is about to stop. The red flashing lights on a school bus means we’re stopped, students are either loading or unloading, pay attention…just be patient and look out for the students.”

Hamel said drivers should also know the laws; know when you’re supposed to stop and to stay about 20 feet behind a bus.

Though a crossing gate feature allows increased visibility of students who are about to load or disembark, it’s also important the students themselves maintain an awareness of their surroundings.

“Pay attention to the bus driver,” Hamel advised. “We’re going to give you a thumbs up when it’s safe to come to the bus and until that happens, stay about 10 feet away from the bus.”

Once students embark on the bus, they should use handrails to keep balance from heavy book-bags or wetness from rain. After they’re seated, Hamel recommends students to sit with their feet flat on the ground and their backs against the back of their seat. The seats are also designed for safety, with heavy duty padding and high back seats creating a protective area that absorbs and disperses an impact—known as “compartmentalization.”

If kids get too loud or rowdy, it’s customary for the bus to pull over until the students calm themselves and stay still so the driver can concentrate on the road.

“It’s always fun to be first, everybody wants to be the first one off the bus. But you can’t move until the bus is stopped. And that’s for your safety.”

When kids do move on the bus, they should walk, not run, Hamel said.

First Student contracts with multiple school districts in Multnomah County and their buses are equipped with GPS trackers. Some of the newer buses added to the fleet this year also have onboard sensors that gives a warning to “please sit down” if it detects a student—or unauthorized person—standing up on the bus for too long and an alarm sound rings until they are seated.

School bus drivers are also some of the most highly-trained, tested and scrutinized drivers on the road, with First Student drivers typically taking part in at least 50 hours of rigorous training and extensive background checks before taking the helm of the reinforced steel buses that weigh about the weight of two elephants, Hamel said.

“One of our best safety features are the drivers.”