Creator of ‘No Hate Zone’ faced discrimination in youth 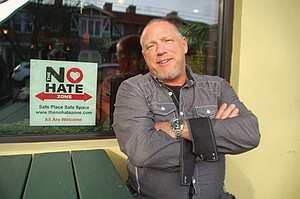 That lawsuit spurred a state task force investigation that eventually determined there were systemic issues in the academy.

Working in law enforcement, Sachs said he did occasionally see discrimination from his colleagues against black and brown people, but emphasized the vast majority of officers he’d worked with were not overtly racist. Some weren’t racist at all, while others were uneducated about diversity and race relations, he said.

Still, he’d seen colleagues racially profiling people of color during traffic stops and even worked with a group of men that called themselves “The Brotherhood of the Strong,” who beat inmates up in county jails.

Having been on the receiving end of discrimination back at the police academy and having been a member of the honor guard for Multnomah County Sherriff’s office for two years, where he regularly attended the funerals of officers killed in the line of duty, Sachs said he has a foot in both worlds. Seeking to reconcile the fight against racism while also remembering cops are human, too, is what led him to do the work he does today with the monthly dinners at Noho’s, which he calls Breaking Bread Breaking Barriers.

“[I] try to bring both groups together to get to understand and see each other in a better light, in a more humane light. Because the reality is there are many more cops and community members that have much more in common than they think. Their priorities are the same, wanting a good way of life and to be compassionate and understanding. But somewhere along the line, all of that has gotten lost. And it has to do with police brutality and the policing of black and brown communities. And police have to take ownership for that,” Sachs said.

He returned to the police academy in 2008 as an instructor in diversity and during his stint as a Human Rights Commissioner for the city, he chaired the commission’s Community Police and Relations Committee.

Thanks to Sachs’ efforts, local and state government in Oregon have adopted equitable hiring practices inspired by the Pittsburg Steelers’ Rooney Rule, named after former Steelers’ owner and former chairman of the league's diversity committee, Dan Rooney, which compels the hiring entity to interview at least one ethnic minority for leadership positions.

That effort started in 2009 when Sachs successfully lobbied the Oregon State Legislature to pass House Bill 3118, which requires the interviewing of at least one qualified minority applicant when hiring a head coach or athletics director at any Oregon state-funded University. A similar measure was adopted for the hiring of city of Portland bureau directors, called the Charles Jordan Standard, and named after the City of Portland’s first African American Commissioner.

Sachs also lobbied to eliminate the use of Native American Mascots in Oregon Schools, part of a larger effort originally brought to the legislature by Native American activists in 2006. He was also involved in advocating for changing the mascot of his former South Albany High School, who had eliminated the Confederate Flag from its logo 10 years ago, from the Rebels to the Redhawks.

Sachs said the change to the mascot was ultimately championed by the students and staff of the school. He added since then he’d seen people transform their views on Confederate iconography--from a source of school pride to understanding of the harm it may cause--just as he had.

“When I scored the winning touchdown against West Albany my junior year, we won 7-6. I ran around the field with a Confederate flag. And I had no idea what that flag meant to people, black people and brown people. But once I realized what it meant, then I had the obligation to try and change it. Everyone does, just not everybody does it.”

For more information on Sam Sachs and his anti-discrimination efforts, visit thenohatezone.com.