Sun Ra Arkestra plans three back to back shows 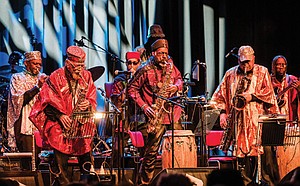 Under the direction of 94-year-old bandleader Marshall Allen, the 15-member Arkestra combines experimental jazz, futuristic costumes and visuals, cosmic chants, and much more to create some of the most beautiful universal music imaginable.

Three back-to-back shows at the Hollywood are scheduled July 14-16 at 8:30 p.m., promising a different set each night, plus visuals on the big screen. The Arkestra was founded in the 1950s by legendary avante garde composer and musician Sun Ra. Since Sun Ra’s death in 1993, the Arkestra has been helmed by longtime Sun Ra collaborator Marshall Allen.

“It could be argued that the Sun Ra Arkestra is the greatest band of all time,” says Mississippi Records’ Eric Isaacson. “Don't miss this opportunity to see them in full force!”

For tickets and more information, call 503-281-1142 or visit hollywoodtheatre.org.