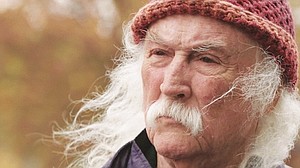 "Trixie Mattel: Moving Parts" is another kind of profile, mainly because its subject is a drag queen who has gained quite a following on YouTube and RuPaul's Drag Race. The film offers an opportunity to walk with Trixie (and her alter ego Brian Firkus) through her (and his) world, but doesn’t shape the experience enough to draw out what is most important to understand about it. The journey feels unsatisfyingly aimless, and yet I'm not sorry to have experienced a window into what ordinary life looks like for a drag queen, to contrast Brian's ordinariness with Trixie's over-the-top persona, and to admire the sureness of purpose that connects the two. So far the film is playing film festivals, with no word of a theatrical release.

A new film documentary about Seattle’s Patronell Wright and her Total Experience Gospel Choir is told against the backdrop of the city’s gentrification and racial history.

I really wanted to like "Patronell: The Total Experience." Patronell Wright is a fixture in the black community in Seattle and has for several decades managed a choir that has been a powerful influence of hope and community. Her story intersects with so many important themes and questions--What has been the cost of segregation? As the neighborhood has changed around her, why has Wright stayed and what does it mean to her to be directing an integrated choir in a gentrified neighborhood? The film doesn't seem to have a point of view on these questions and settles for hero worship, which left the majority white audience feeling entirely too good and not forced to confront their complicity in oppression of black folks in their city. That said, I'm happy to know about this particular Seattle community leader. I suspect the film won't have a theatrical release, but may find a place to land online.

One of the best docs I saw was “One Child Nation,” an expose’ of the one child policy that was in force in China for 35 years, from 1979 through 2015. Most people in the U.S. know little about the policy, beyond the resultant heightened favored status of male heirs which led to a generation of “little emperors” and a wave of unwanted baby girls who were later adopted, including by Americans. Not only does this film lift the veil on a host of much more troubling human rights violation attendant to the policy, but it also provides an occasion to witness director Nanfu Wang’s own awakening. She notes that, having grown up under the policy, she did not question it until becoming a parent herself in the U.S. An important part of the journey the film makes is to document how a practice or policy with devastating consequences can be so woven into daily life that we don’t think to question its effects. This film documents what it can mean to wake up and follow where the questions lead. It will open theatrically in August.

"Midnight Traveler" also means to wake us up, to the plight of asylum-seekers and the struggles they encounter to build a stable life away from home. Here, a young Afghan couple, both filmmakers, document their own journey out, aiming to escape pressure and death threats from the Taliban. They leave with their two young daughters, first to Tajikistan and then on foot through Turkey, Bulgaria, and Serbia as they make their way to the European Union. It's a harrowing journey, caught on their cellphones, and the film gives a sense of the dangers and uncertainty they face, along with all the ways they attempt to make the best of their circumstances. The film has garnered attention and awards on the festival circuit and is scheduled for a theatrical release in September.