Masked Up for Protest

Do concealed identities embolden the violence? 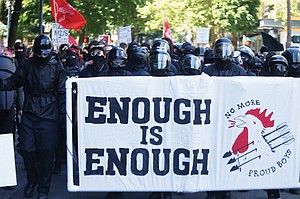 Would the elimination of masks at Portland protests make demonstrations more peaceful? That was the suggestion of Police Chief Danielle Outlaw in response to violence that has been occurring at political rallies and demonstrations in recent years, in which right-wing participants, and left-wing counter-demonstrators, have been engaging in bloody street brawls.

Mask-bans are nothing new in the United States, with around 15 states and some counties and cities having some kind of regulation on the hiding of faces during a protest. Many of the anti-mask laws around the country were passed in response to a wave of violence perpetrated by Ku Klux Klan members wearing hoods between 1920 and 1950. Dr. LeRoy Haynes, a black pastor and the chair of the Albina Ministerial Alliance Coalition for Justice and Police Reform, pointed out the stark contrast between the peaceful, non-violent heyday protests of the 1960s civil rights era he’d participated in since he was 13, in the tradition of the philosophies of Dr. Martin Luther King Jr., compared to today’s both right-wing and left-wing counter protestors having been documented wearing masks and occasionally engaging in violence with each other.

When multiple groups, including the right-wing Proud Boys, a designated hate group by the Southern Poverty Law Center known to strike up violent conflicts in Portland, and left-wing counter protestors known as antifascists or Antifa clashed last month, bloody fist fights broke out during what police called a “civil disturbance.” Three arrests were made and several injuries reported.

Video footage of conservative writer Andy Ngo getting assaulted and pelted with milkshakes from what appeared to be mask-clad Antifa sparked nationwide backlash and criticism of Portland Police Bureau and Mayor Ted Wheeler.

Outlaw proposed making a law making it illegal to wear a mask while a crime was being committed to help reduce the violence at future protests.

“Legislation would really be helpful prohibiting the wearing of masks during the commission of a crime…If you knew that you can be easily identified, do you think you would be as inclined to commit that act of violence or commit that crime personally?” Outlaw asked at a press conference a few days after the clash.

Haynes told the Portland Observer that he wouldn’t have a problem with police implementing a mask ban for people committing crimes, but urged that such a proposal should not “impinge upon the rights of citizens to march and to peacefully assemble for their grievances.”

John Parry, a professor of law and associate dean at Lewis and Clark Law School, said he understands the frustration the police have in terms of quelling the violence at protests and agreed that “the best way to do it, if you’re going to do it, would be to specifically link the mask wearing to the commission of some other crime, and perhaps a crime of some seriousness.”

Parry, who teaches courses on civil litigation, noted he does not consider himself a specialist in First Amendment rights issues but agreed any legal problems that could arise from a hypothetical law banning masks when a crime was being committed would certainly be due to free speech issues.

“The way in which you choose to present yourself in public is certainly a form of expression… And if we start criminalizing that we’re going to have to be awfully careful of how we tailor that in a way that gets at the specific problem that we’re trying to address,” he said.

Though Parry acknowledged the rationale that wearing a mask may make a perpetrator “more emboldened to assault someone,” he questioned the practicality of such a law.

“If I break the law by wearing the mask, the fact that the law is there doesn’t make it any easier for them to find me. I’ve worn the mask; yes I’ve broken this additional rule, but good luck finding me.”

Parry also acknowledged that the proposal as it’s been stated so far is quite vague, and that a hypothetical law banning the wearing of a mask during a crime could manifest in a myriad of different ways. If it were a state statute, for instance, the determination would have to be made as to whether the law was carried out as an aggravating factor for sentencing or as an additional violation added on to some other offense, he said.

Prior court rulings of mask bans have been mixed. For example, an anti-mask statute in Georgia, originally created as an anti-Klan law, was recently upheld in a case where a man wore a “V for Vendetta” mask to a protest in Atlanta in 2014, related to a grand jury’s decision in a police-shooting case in Ferguson, Mo.

On the other hand, a federal court in Indiana struck down one of its anti-mask laws in 1998 in a case that involved the Klan challenging a Goshen city ordinance barring the use of masked hoods. The U.S. District Court judge ruling in that case stated that the law had the effect of “directly chilling speech” by infringing on the group’s right to associate anonymously.

Sierra Ellis, a spokesperson from Mayor Ted Wheeler’s office, told the Portland Observer via email that the Mayor has been talking with Chief Outlaw about her concerns, but has not yet taken a position on the masks.

“We need to learn more about the implications of it. We’d also like to get community leaders to weigh in,” Ellis said.