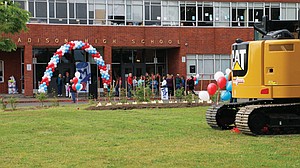 This summer marks the beginning of a number of Portland Public School modernization and construction projects, including the renovations to northeast Portland’s Madison High School and the construction Kellogg Middle School in southeast Portland, thanks to a large bond approved by voters in 2017.

Madison High School is set to close for two years starting this fall after it undergoes major modernization construction, which includes more than 170,000 square feet of new construction, including a theater, commons and gym.

Built in 1955, Madison’s 1,700 students will temporarily move into the Marshall High School campus that has been occupied by Grant students the last two years during that school’s modernization work. Grant students will move back into their modernized campus in the fall.

The building of the new Kellogg school, slated to open in the 2021-22 school year, will give the students a state-of-the-art facility with over 100,000 square feet of new construction as the first new school campus to be built in southeast Portland in decades. It will include a performing arts stage, a multi-purpose gym and assembly space, a large flexible commons space, and dedicated outdoor learning spaces.

The old Kellogg campus, which was originally opened in 1917, was demolished starting in July 2018 after permanently shutting down in 2007 during a time of dwindling enrollment and funding.

Other bond work completed this summer includes new seismically strengthened roofs built at Sitton and Rigler Elementary Schools and Jackson Middle School. Rigler and Rose City Park will also get new elevators, and the seismic retrofitting of Hayhurst Elementary will commence this summer.

The projects were made possible thanks to a $790 million bond passed by Portland voters in 2017.