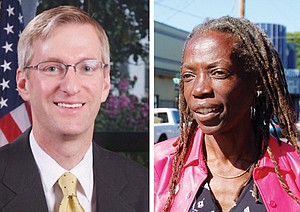 To address a housing crisis, Mayor Ted Wheeler’s proposed city budget for the next fiscal year prioritizes added funds to help the homeless, which was not a surprise. But the mayor’s plan also provides a small stipend to boost efforts to redevelop residential areas around the Rose Quarter for Albina Vision, boosting a plan to rebuild a diverse neighborhood and correct historical displacement.

The mayor’s $577.3 million general fund budget released last week had several new line items compared to years prior, including a $500,000 set aside for addiction-treatment, a reversal of past policy when the city has left funding for such services up to the county.

Wheeler proposes $187,000 in new funding for a Mental Health and Nurse Triage Program, a request by new City Commissioner Jo Ann Hardesty to defer low-intensity 911 calls to a nurse to connect the caller to services.

Also at Hardesty’s request, the mayor included another $500,000 for a new “street response” team —addressing people sleeping outside without law enforcement involvement.

The first African American woman on the City Council, Hardesty also offered an alternative way to fund Wheeler’s plan to increase funding to the Police Bureau, recommending an end to the Bureau’s gang enforcement unit, citing its ineffectiveness. Instead she would move the 28 officers from the Police Bureau’s Gang Enforcement Team (now known as the Gun Violence Reduction Team) to general patrol to help alleviate a projected 120 officer vacancies. She also recommended defunding police body cameras.

Hardesty clashed with Wheeler’s budget on some other issues as well, such as the $200,000 feasibility study for a water taxi service on the Willamette and Columbia Rivers, called Frog Ferry.

Albina Vision would receive $75,000 under Wheeler’s proposal, for outreach—also a new item. The diverse group of backers of Albina Vision previously gained the support of the mayor and Metro Council President Lynn Peterson.

The full City Council will vote on whether to approve the budget in June.