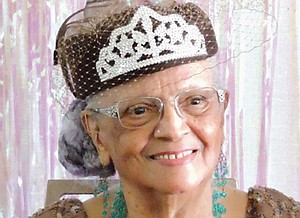 Lois Alfreda (Graze) Jackson was the youngest of eight children born to the union of Johnnie Clifton and Chauncey Earle (Hightower) Graze of Beaumont, Texas. She graduated from Martin High School in 1946. Nathan Joseph Jackson Jr. was the first young man her mother allowed her to call her boyfriend and on her deathbed in November 1946 she sent for Nathan and his mother and asked him to marry Lois and take care of her and he did just that until his death in 2012; they had been happily and lovingly married for 65 years. Lois and Nathan had four daughters: Brenda Gail, Phyllis Jeanette, Janet Denise and Kathy Renee. In 1951, with Brenda and Phyllis in tow, they migrated to Tacoma, Wash., where Janet and Renee were born.

Lois and Nathan doted on their three grandsons: Frelimo Mott, Robert (Bobby) Janisse Jr. and Marcellus Jackson. The family was long-time members of St. John Baptist Church under Dr. J.A. Boles and later Shiloh Baptist Church under Rev. Earnest Stonewall Brazill (Nathan’s cousin). In 1987, after Nathan’s retirement, they decided to move back to Beaumont, and united with St. John Baptist Church under Rev. O.J. Beasley Jr. After 10 years in Texas they relocated to Portland where they joined Vancouver Avenue First Baptist Church under Pastor J.W. Matt Hennessee. Lois loved her church and was a very active member -- she served as a Deaconess, was on the Mother Board, and was the church photographer. She made the beautiful hat quilt that hangs in the church’s fellowship hall and volunteered where ever needed. She also created memorial pages for deceased members of the church and The Miracles Club.

Lois was a very talented and accomplished person. She was an excellent seamstress. As their four daughters were growing up, she made all their clothes for school, church, proms, cotillions, and her eldest daughter’s wedding gown. Nathan willingly wore all the suits, shirts, and ties she made, which fueled her creative confidence and honored the memory of her mother who taught her to sew at an early age. Lois also designed and made her own clothes, including a dozen crocheted dresses. She was a true fashionista and was known for wearing hats, high heels and plenty of bling bling. Lois also was an avid crafter, quilter, and furniture upholsterer; she laid ceramic tile, designed and made drapes, designed and made all her greeting cards, made stained glass windows, made macramé wall hangings, painted ceramic figurines, and crocheted afghans (gave away over 50). Lois was an amateur photographer and loved to enhance her photos with Photoshop which she learned after the age of 80; she became proficient in restoring scratched and torn photographs. She recited Black poetry and had an amazing 100+ poems committed to memory. Her Black doll collection includes 500+ dolls many of which she made, painted, cleaned up and/or redressed; 135 of her celebrity dolls are on display at Self Enhancement, Inc. She also had a green thumb and loved to garden and raise beautiful flowers. To top it all off, Lois was an excellent cook and she loved cooking for her family and others. She worked expertly in so many creative fields that her slogan became “Leave it to Lois.”

Memorial donations in the name of Lois A. Jackson will be gratefully accepted by the non-profit agency Self Enhancement, Inc., 3920 N. Kerby Ave., Portland, OR 97227, www.selfenhancement.org.