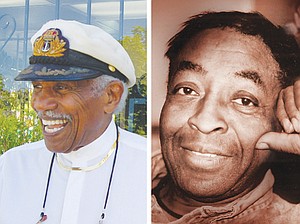 Paul Knauls and Ural Thomas, two icons of Portland’s black community and longtime fixtures in the city’s music scene, will be honored Saturday when the Oregon Music Hall of Fame holds it 2019 induction ceremony at the Aladdin Theater.

Knauls, affectionately known as the Mayor of Northeast Portland, a community booster and business owner for generations, will receive a heritage award; and Thomas, the R&B funkmaster inducted into the Oregon Music Hall last year, will be named this year’s Artist of the Year.

Knauls moved to Portland in 1963, purchasing “The Cotton Club” on North Vancouver Avenue. It was an instant success, hosting touring jazz musicians and late night visits from Sammy Davis Jr., Joe Louis, the Kingston Trio and Mama Cass. He helped spawn local musical careers like that of Mel Brown, Billy Larkin, Shirley Nanette and Ron Steen, who played his first gig for Knauls.

Thomas was born in Portland in 1939. In his teens, he was performing with a doo-wop group, the Monterays, and in 1964 recorded “Deep Within My Heart” and “Push ‘em Up” for the regional Sure Star label. By 1966, he signed with LA producer/writer Jerry Goldstein, recording “Can You Dig It?” with Mary Wells, Brenda Holloway and Mary Wilson backing him up. He appeared at the famed “Apollo” club in Harlem, opening for the likes of Stevie Wonder, Otis Redding and The Rolling Stones. By the mid 70’s he’d moved back to Portland where he hosted jam sessions and played music with friends.

In 2010 he was coaxed out of semi-retirement and back into the recording studio for the first time in 40 years. His current band Ural Thomas and The Pain last year released their latest album, the well-received and aptly titled The Right Time.

This year’s Oregon Music Hall of Fame induction ceremony will include performances by Little Sue, Michael Hurley, Sequel and Pond with special guest Mark Lindsay who will also be one of the musicians inducted as an individual artist. He already had a spot in the Oregon Music Hall for being a member of this historic band Paul Revere and the Raiders.