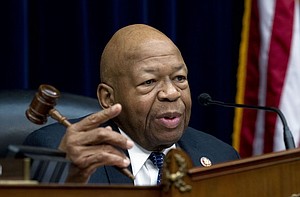 A wake and funeral for U.S. Rep. Elijah Cummings will be held Friday, Oct 25 at the New Psalmist Baptist Church in Baltimore, Md., the congregation where he worshipped for nearly four decades.

Cummings, a sharecropper's son who rose to become a civil rights champion and the chairman of one of the U.S. House committees leading an impeachment inquiry of President Donald Trump, died last Thursday of complications from longstanding health problems. He was 68.

Cummings was a formidable orator who advocated for the poor in his black-majority district, which encompasses a large portion of Baltimore and more well-to-do suburbs.

As chairman of the House Oversight and Reform Committee, he led investigations of the president's government dealings, including probes in 2019 relating to Trump's family members serving in the White House.

Trump responded to the investigations by criticizing the Democrat's district as a "rodent-infested mess" where "no human being would want to live." The comments came weeks after Trump drew bipartisan condemnation following his calls for Democratic congresswomen of color to go back to their "broken and crime-infested countries."

A lifetime member of the NAACP, Cummings consistently brought attention to the plight of African-Americans and oppressed populations throughout his 23-year service in the U.S. House of Representatives.

"He demanded justice on every front and never shied away from standing up for the most vulnerable," said Derrick Johnson, NAACP President and chief executive officer.

The Salem Keizer Branch of the NAACP issued a statement to mourn Cummings’ passing, calling him a resounding civil rights icon who prevailed in the face of adversity against all odds.

Rep. Cummings became a nationally-recognized figure when he was appointed the chair of the Committee on Oversight and Government Reform in 2019. One of the few African-Americans to lead such a prestigious committee, Rep. Cummings often took swift action to call out inequity and abuse of power when confronted.

"Among the many accolades he received throughout his storied life, his legacy of championing issues, facing injustice head-on and speaking truth to power will forever be a part of his greatest contributions," said Leon W. Russell, Chairman, NAACP Board of Directors.

We are deeply saddened by his passing but profoundly grateful for the contributions he made in his lifetime. The NAACP extends our sincere condolences to his family and sends prayers of comfort and strength for the days to come.

-Associated Press contributed to this story.