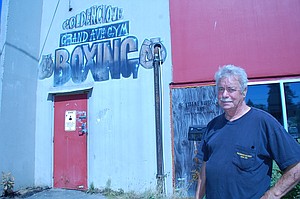 Editor's note: This story was updated on Tuesday, Sept. 3 with new information about damages and a required inspection before the club can be possibly re-opened:

Fred Ryan was very grateful when his Grand Avenue Boxing Club appeared to be spared from last week’s northeast Portland inferno where an intentionally-set fire destroyed two large commercial buildings next door as well as two townhomes down the street, but Ryan learned Tuesday, there may be damage to the gym’s building that’s not easily seen.

He said the fire department will have to inspect the building before any repairs can be made.

“If it rains before then, the place may have to be condemned,” he said.

The fire came within inches of the club at 8333 N.E. Russell St., but the building sustained water and smoke damage in the effort to keep flames at bay.

Ryan hopes to open in the near future and at the same site if at all possible.

It’s important to reopen soon, Ryan said, because it’s vital to the kids who come there to work out and learn to box, a skill that serves them well, he said.

“If it weren’t for amateur boxing, there would not be any normal kids today,” he stated firmly.

One bit of good news is that the gym recently was approved as a 501c3 nonprofit and will start fundraising soon. In the meantime, anyone who wants to help with cleaning up or making tax-deductible donations can call Ryan at 503-286-3597 or 503-235-9559.

The gym has had a lot of ups and downs over the years, but thousands of young people and many boxing champions have passed through club doors. Ryan said the club has been especially important to Portland’s African American community because not all kids want to play basketball, football or track.

Until 2008, Grand Avenue sponsored Golden Gloves tournaments, but it became too expensive, Ryan said, because he bought everything, including jackets and trophies, out of his own pocket. Now that the club is a nonprofit, he hopes to look at Golden Gloves tournaments in the future, but right now he just wants to open his doors to his young boxers, many of whom came to check on the gym even while firefighters were battling the blaze next door.

The young people who come to the Grand Avenue gym learn much more than boxing techniques, Ryan says, and boxing gives them the recognition and sense of accomplishment that many of them crave. Many kids are from single-parent homes, he said, and some are homeless, but many have achieved more success in their school and personal lives from the discipline they learn at the gym.

Ryan cited the case of a teen named Mark, who was sleeping on friends couches and was about to fall through the cracks at school when he discovered the gym. After getting involved, Mark gained self-esteem and started turning in his homework and then improved his grades dramatically.

“He turned his life around, and many teachers come to see what we are doing here,” Ryan said.

The gym charges a $40 per month membership, he said, but no one is turned away, and work scholarships are available.

James Wade has been coaching at Grand Avenue for about three years, he said, and agrees with Ryan that the gym is important to many people, and both boys and girls are welcome. He said being at the gym is like being in a family and has saved the lives of some kids.

One young man, for example, came to the gym after being tempted by his friends who wanted to steal cars, Wade said. As a result, the young male who chose to steal a car was killed in a car crash at the same time the other youth was working out.

“It sends a message to keep going,” he said. “Their friends might go to jail, but they’re here.”

Keeping the club going is important to the community as well as individuals, Ryan said. The club was first formed in 1949 and is one of the oldest running gyms in the country. Ryan has been with the club since 1989, and in 2000 he moved it from its original Grand Street location to the Russell Street site.

Wade, a member of the black community, said his young athletes learn much more than boxing – they learn good manners and how to relate to people of all races. He said he was raised in Chicago and thought all white people were bad, until he went to his first tournament.

“A little white kid came up and asked for my autograph,” he said. “And I learned something that day.”