School next in line for bond financing 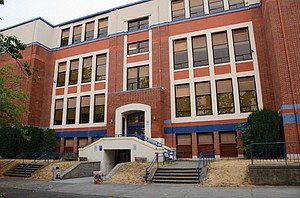 Jefferson High School, home for generations of families from Portland’s African American community, will get a complete renovation, and schools surrounding Jefferson will start a process to open a new Center for Black Student Excellence, as part of a proposed construction bond referred to voters by the Portland School Board last week.

Scheduled for the November General Election, the $1.1 billion property tax measure would renew the last school construction bond at the same tax rate that has provided monies for rebuilding or replacing other aging Portland schools in recent years, district officials said. It would also continue other investments in Portland schools, including funding for critical educational, health and safety priorities.

“I’m excited we are investing in the modernization of Jefferson and focusing on the Center for Black Student Excellence,” Board Director Michelle DePass said. “It tells our Black students, your education matters. It tells them we care and are listening to your voice. I can’t wait to witness the students we are investing in today.”

Superintendent Guadalupe Guerrero said the decision to remodel Jefferson and improve educational supports for black students keeps with past promises by the district and listens to the priorities of the district’s community partners.

“If we’re going to succeed in serving Black students and youth, we’ll have to do it together,” said Guerrero.

In addition, the bond would pay for new instructional materials and critical technology upgrades, including devices such as laptops, tablets and assistive technology that support both distance and classroom learning. The proposal includes $33.8 million for improved accessibility for students, staff and other people with disabilities; repairs or replacement of outdated roofs and mechanical systems; and improved seismic safety and school security systems.

The planning for a Center for Black Student Excellence were developed in conjunction with the Albina Vision Trust, a grass-roots effort to rebuild a Black and diverse community near the Rose Quarter that was displaced by decades of Urban Renewal.

Over the past eight years, the Portland Public Schools bond program has also addressed infrastructure needs at district schools throughout the district, including replacing plumbing to reduce lead, removing or encapsulating exposed lead paint and asbestos and upgrades to fire alarm and sprinkler systems.

For more information about the 2020 School Renewal Bond, visit pps.net/2020bondrenewal.