School changes course after ‘listening to many voices’ 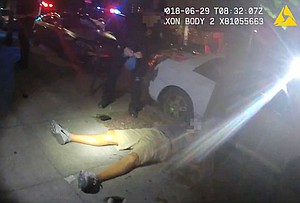 (AP) — Portland State University said Thursday it will disarm its campus police force, more than two years after officers from the department shot and killed a Black man who was trying to break up a fight close to campus.

The announcement came as Portland approaches 80 days of nightly protests following the death of George Floyd, the Black man who died after being pinned by the neck by a white Minneapolis police officer

Portland State President Stephen Percy said the decision to have officers patrol the campus unarmed is the first step in a broader policy to re-imagine safety at the state-funded university in the heart of the city. The university has more than 26,000 students, although many commute to class.

“Over the past few weeks we have listened to many voices across our campus,” Percy wrote in an email to campus announcing the change. “The calls for change that we are hearing at PSU are ringing out across our nation. We must find a new way to protect the safety of our community, one that eliminates systemic racism and promotes the dignity of all who come to our urban campus.”

Activists had been calling for Portland State to disarm campus police long before Floyd’s death.

The campus police officers got guns for the first time in 2014 following a contentious decision that came despite concerns raised by students.

Then, in June 2018, two campus officers fatally shot 45-year-old Jason Washington, a Navy veteran and employee of the U.S. Postal Service, near a bar just outside the boundaries of the university’s campus.

A report by the Portland Police Bureau found that college police officers fired 17 times and Washington was struck nine times. Oregon’s medical examiner ruled the death a homicide. A grand jury ruled that the two officers should not face criminal charges.

Washington had been out drinking with friends when his group got into a confrontation with another group outside a bar called the Cheerful Tortoise just off campus in downtown Portland.

In this June 29, 2018, file photo, police stand outside across from The Cheerful Tortoise bar at the scene of an earlier shooting. Portland State University said Thursday it will disarm its campus police force more than two years after officers from the department shot and killed Jason Washington, a Black man who was trying to break up a fight. (AP photo)

A lengthy report released three months after the June 29, 2018, shooting, as well as footage pulled from the officers’ body-worn cameras, show Washington had a gun in his right pocket when he tried to come to a friend’s assistance during a fight. Officers later found a legal permit to carry a concealed weapon in the dead man’s wallet.

As campus police arrive at the scene, a man shouts several times, “He pulled a gun on us! He pulled a gun!” as he points to Washington, who appears to be trying to keep his friend from a fight.

At that point, Washington’s visibly intoxicated friend breaks away and begins punching another man until he is kicked by a third person in the head and knocked out.

As Washington tries to pull the man away from his unconscious friend, one PSU officer grabs Washington’s arm from behind and tells him to back away from the fight. A black object that appears to be a gun is visible protruding from Washington’s right hip pocket at that moment in body camera video.

Washington stumbles backward and falls to the ground as someone says, “He’s got a gun!”

Washington gets up, takes several steps away and turns to face the two officers as they shout at him to drop the gun.

The medical examiner’s report quotes one of the officers as yelling, “Do not pick up the gun!” just before the officers fired 17 shots “in very quick succession.” It’s not clear from the video if Washington had already picked up the gun when he was shot.

Portland State hired two independent firms, one to examine the school’s policy of arming campus police and another to conduct its own investigation into the shooting.