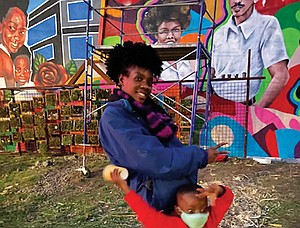 Portland’s Black community and support for artists of color are celebrated with the creation of a new public mural to replace another mural that celebrated diversity on the side of the Micro Enterprise Services of Oregon building (MESO), a nonprofit provider of small loans and business help born out of the Black United Fund.

The organization is in its last round of fundraising to complete the dramatic new scene at the corner of Northeast Martin Luther King Jr. Boulevard and Shaver Street. The artwork showcases and honors diverse innovators and the role Black-owned small businesses play in Portland.

The artwork was created under the direction of Black artist and muralist Rodolfo Serna. Joining him in completing the mural are five other artists of color: Latoya Lovely, Alex Chiu, Kyra Watkins, Adia Gibbs, and protégée Emmanuel (Manny) Dempsey. Black community historian Kimberly Moreland is also a consultant and volunteer working on the project.

Earlier this year, MESO set a goal to raise $15,000 to create the mural. A Go Fund Me campaign was a little more than $5,000 away from that goal last week, organizers reported. The donations provide stipends for the artists’ time and talent as well as pay for paint, scaffolds, and other supplies, organizers said.

The new mural also pays tribute to a previous mural that honored African American heritage on the south side of the MESO building, the former administrative officers for Irvington Covenant Church. That mural, which had to be replaced in 2009 to repair cracks in the building, was a much loved part of the community.

The new artwork, focusing on Black businesses, past, present and future, already is proving to be as popular as the original, with MESO receiving positive comments from Portlanders who have viewed the colorful addition to the neighborhood.

“It has been a surreal experience to pay tribute to the Black entrepreneurs in Oregon through this mural. Entrepreneurship is in our blood and I hope that the mural inspires the younger generation to follow the footsteps of their elders,” said Felicia Wells-Thomas, MESO community liaison manager.

People interested in making a donation to support the MESO mural and the artists creating it can do so by visiting the MESO Mural Go Fund Me site (gofundme.com/f/meso-mural) or by contacting Felicia Wells-Thomas at fwells@mesopdx.org. All donations are tax-deductible.

MESO began as a grassroots initiative in 2005 under the Black United Fund of Oregon. Since then, it has expanded its services and coverage area to more than 3,000 small businesses, with a focus on entrepreneurs of color, women and low-income individuals. Approximately 600 entrepreneurs MESO works with each year access services from the nonprofit's main office at 4008 N.E. Martin Luther King Jr. Blvd. and its satellite offices in Beaverton, Gresham's Rockwood neighborhood, Happy Valley, and in several counties in Oregon and Clark County in Washington state.