Finishes one picture; plans next role as Aaron Campbell 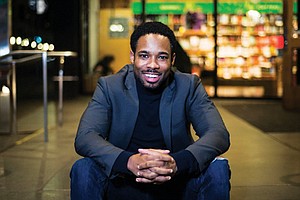 Ramone Palmore, a Portland actor and producer is celebrating the completion of a new movie, “Saving District,” a short film about school shootings in America, and he will soon take on the role of Aaron Campbell in a new movie about the black Portland man who was killed by a police sniper 10 years ago in a confrontation outside his apartment while mourning the death of his brother.

“Saving District,” a short independent film that is coming out on March 14, is about a kid named Dennis, a high schooler with a rough life who feels like he is at the end of his rope. He's been pushed down his whole life, and for once he doesn't feel like getting back up. The extremes he is willing to go to make his voice heard is s reflection of the chaos and gun violence happening in America right now.

This summer, Palmore will begin production of “Two Sons in a Day,” the film based on the events leading to Campbell’s death when he was gunned down by law enforcement on the same day his brother Timothy Douglas passed away from heart complications leaving Campbell hurt and emotionally raw.

As police showed up to his home, Campbell complied to orders of walking backwards out of his apartment with his hands over his head, but a police sniper shot him, leaving Marva Davis, the mother of both sons, heartbroken and searching for answers. Two Sons in a Day will be directed and written by Mischa Webley and produced by Elevate Pictures and Global Millennium Pictures.

Palmore, 35, started acting with Director Beth Harper at Portland's Actors Conservatory. He studied at the Artists Repertory Theatre with instructor Chris Harder. He was cast in “A Street Car Named Desire” at the Second Story Repertory theatre with Director Jane Ryan. He was then asked to lead in commercials for KGW news and Modus. Palmore has appeared in Grimm and the Librarians on TV.