Concordia to Shut Down 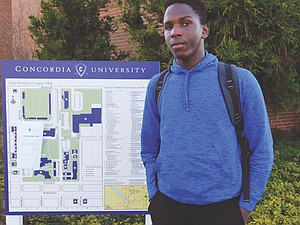 Goodness Adfope was still in shock on Monday afternoon upon learning his school was going to close. Concordia University, a northeast Portland landmark serving a diverse population, will close its doors after 115 years of operation.

There was no warning to students that the private college, founded by the Lutheran Church–Missouri Synod in 1905, will permanently close after this semester, and many were in tears at the news, Adfope said.

Adfope said when he told his family back in Nigeria, they agreed that he should stay in Portland and look for another school.

He said he will try to enroll Portland State University, which announced it is ready help Concordia and to “provide any needed assistance to the university and its students during this difficult time.”

Concordia’s interim president, Tim Ries, who joined the staff only a month ago, said the school’s board of directors decided Friday that the university’s current and projected enrollment declines and poor finances “make it impossible to continue its educational mission.”

Concordia currently serves about 6,000 students – 1,600 undergraduates and 4,300 graduate students, down from 8,000 students just a few years back. The school’s closure will also include its law school in Boise. The school says it will work with students, but just where they will continue their education and where Concordia employees will find jobs is still up in the air. The college had 340 employees, including 200 full-time and part-time faculty.

The Concordia campus on Northeast Holman Street will likely be sold, officials said, but the sale will not impact Faubion Elementary, an adjacent school building facing Northeast Dekum, official said.

Faubion, a newly constructed school that replaced an outdated building, is owned by Portland Public Schools. Concordia students and faculty worked with Faubion teachers in a wrap around program called “3 to Phd,” helping low income families and students of color obtain success in life, from age three to advanced college degrees.

The college was known as an important resource for its education and nursing programs, bringing new teachers and nurses of color to local schools and medical facilities. The campus also expanded its footprint in the last decade with new athletic fields and a library.

According to a recent U.S. News & World Report, many small colleges are shutting down because of financial pressure and declining enrollment.

Marylhurst College in Lake Oswego, which awarded its first degree in 1897, closed at the end of 2018, citing declining enrollment as the main reason. Some Marylhurst students went on to study at Concordia University.

Ries came to Portland in January after serving as president of Concordia University in St. Paul, Minn., where he was able to lower tuition and increase enrollment, something he had hoped to do here.

But the financial hurdles were too large to overcome, Ries told KGW New8.

“It has had negative cash flow for quite some time and its assets and its liabilities are out of balance,” he said. Ries said enrollment has dropped dramatically in recent years.

Ries said the school will help students transfer to other schools and faculty and staff would be told more about their options in coming weeks.

The last commencement ceremony at the university will be on April 25 and the law school graduation will be on May 2.