Guilty on All Counts 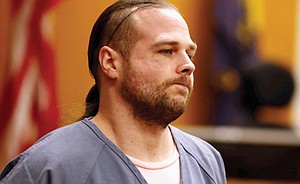 Jeremy Christian, the man who went on a racist tirade spewing hate against two young black women and others on a Max train in 2017 before killing two passengers and critically wounding a third, awaits a possible life sentence after being convicted on all charges Friday.

A Multnomah County jury was unanimous in convicting Christian, 37, on 12 charges, including murder, attempted murder, assault, intimidation and menacing. The trial took four weeks and included chilling graphic video of the attack and gripping testimony from passengers and survivors on the train.

On Tuesday, the jury returned to the courtroom to decide Christian’s sentence in proceedings expected to take two days. A possible death sentence was taken off the table earlier by the judge, the unintended consequences of a new law in Oregon lowering the threshold for cases eligible for the charge of aggravated murder. He also could be eligible for parole after 30 years because of the new law instead of no possibility of parole.

Christian killed Taliesin Namkai-Meche and Ricky Best by stabbing them in the neck. He also was convicted of attempted murder for stabbing survivor Micah Fletcher in the neck. The jury also found him guilty of assault and menacing for shouting slurs and throwing a bottle at a black woman on another light rail train the day before the May 26, 2017, stabbings.

The stabbings’ racial undertones shook Portland, which prides itself on its liberal and progressive reputation but also grapples with a racist past that included limits on where black families could live and a neo-Nazi community so entrenched that the city was once nicknamed “Skinhead City.” The deaths also came weeks after a black teen was run down and killed by a white supremacist in a Gresham convenience store parking lot — a case that also grabbed headlines.

In the days after the stabbing, photos and video surfaced showing that Christian had recently attended — and spoken at — a rally hosted by a far-right group called Patriot Prayer, whose periodic political events were already causing tension in the city. He was captured on camera making the Nazi salute while wearing an American flag around his neck and holding a baseball bat.

On Facebook, his prolific posts slammed Portland as a place so politically correct that his right to free speech was constantly under assault. Those beliefs were front and center in the courtroom, too, when Christian told the judge on the first day of trial that he would wear his jail-issued blue uniform instead of a suit because to do otherwise would be like lying.

“I don’t care how much time I spend in prison,” he said. “All I care about is the public gets to see and hear what happened on the train.”

According to prosecutors, Christian boarded the train during the evening commute on May 26, 2017, and began shouting racist, anti-Muslim and xenophobic slurs at the two young black women. One was an immigrant from Somalia and wore a Muslim headscarf. Some witnesses said Christian in his outburst made a slicing motion across his neck and mentioned decapitating people.

As his tirade continued, Christian grabbed Namkai-Meche’s cellphone and threw it to the ground. Defense attorneys argued that Namkai-Meche had first approached Christian and was trying to film the tirade, which made him feel cornered.

Authorities say another passenger, Fletcher, stood up to intervene and got into a shoving match with Christian, who was taunting the men to “do something” to stop him.

Christian stabbed the men 11 times in 11 seconds. He would later tell a court-appointed psychologist during mental health evaluation that he felt like he was on “auto-pilot,” according to court records.

He was arrested a few blocks away.

--Associated Press contributed to this story.