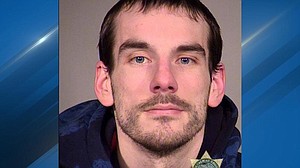 A Portland man who was banned from TriMet after dozens of sex crimes now faces four new charges stemming from a sexual attack against an employee at Emanuel Hospital in north Portland.

Jared Walter, 33, was arrested Wednesday a few hours after police were called to the hospital to investigate. He is accused of following the female worker and reaching his hand past her skirt towards her buttocks. The woman also reported finding a substance he left on her clothing and in her hair that appeared to be a bodily fluid, according to court documents.

Walter has been convicted, charged or implicated in dozens of prior incident where he’s cut, masturbated into, glued or otherwise touched women’s hair, offensive physical and sexual contact that led him to be called “The TriMet Barber.”

In the new charge, Walter is accused of intentionally and without consent propelling a dangerous substance at a person and doing so with the purpose of arousing himself or to gratify his sexual desire. Under Oregon law, “dangerous substance” means blood, urine, semen or feces.

Police located and arrested Walter in downtown Portland. When contacted by police, he admitted to being at Legacy Emanuel Medical Center, according to court documents.