Police Accountability Bills Only a Beginning

Portland NAACP applauds action; but says more must be done 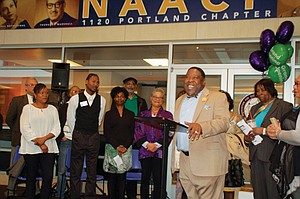 The Portland branch of the NAACP applauds the slew of police accountability bills passed in the Legislature’s historic special session last week -- it is gratifying to see the politics of the moment turned into action.

Of particular note is the content of SB 1604, which, after receiving bipartisan support in previous sessions, managed to escape dilution and clear both chambers. This bill goes a long way toward reforming the manner in which police officers are disciplined and the role of arbitration in that process.

Officers whose termination or disciplinary action is overturned by an arbitrator do not have credibility with the public or their peers. Standardization, consistency, and transparency in the discipline are all important and necessary components of police reform as we ride this wave of transformation.

We want to pause here and stress that these pieces of legislation are just the beginning. The People of Color Caucus are to be commended for their excellent work, and likewise, understand that we have a long way to go.

Here in Portland, in addition to the changes that will come as a result of SB 1604, we support the push for a truly independent police accountability panel with subpoena powers to avoid any perception of “The police policing the police.” This panel should be diverse and representative.

We need to do everything we can to ensure discipline from misconduct is in line with the public’s expectations. We believe the trust of the community can in fact be won by the police overtime under the right circumstances.

Right now, demonstrators across the country are demanding more from those sworn to protect and serve. If the PPB is ever to live up to being “Portland’s Finest,” they need to chip away at the wall separating themselves from the citizens they police. We imagine a future where both the police and ordinary citizens consider themselves to be on the same side: Working together to improve public safety and neighborhood livability.

From the Senate floor, Sen. Lew Frederick quoted a stanza of Lift Every Voice and Sing, often referred to as the Black National Anthem and in 1919, it became the official song of the NAACP. In it, the lyrics encourage us to embrace “The faith that the dark past has taught us.”

We share Sen. Frederick’s desire to “March on until victory is won,” although we are unsure that our dark past should inspire faith. Our hope is that this time is different and that a year from now we find ourselves in a world vastly improved from the one we are in now. To accomplish that, perhaps a little faith is needed.

E.D. Mondainé is president of the Portland NAACP.