On the Front Lines for Change 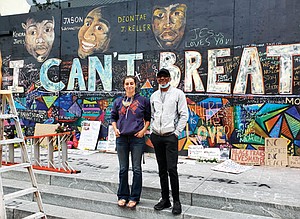 Support is growing for a bereaved father from Portland’s Black community who is leading a group of individuals from families like his to Washington, D.C. for the 57th anniversary of the March on Washington to promote racial justice and demand action to stop unjust police shootings.

Joe “Bean” Keller, who lost his son in a Portland police shooting back in 1996, is leading the delegation of at least a dozen other Portlanders to the Aug. 28 march organized by Al Sharpton’s National Action Network

Keller told the Portland Observer that thanks to $10,000 in donations that had been generated by a Go Fund Me account through Monday, he and two members of his family and members of at least 12 other families in Portland will attend the anniversary event. All of the planned participants have lost a family member at the hands of police.

The aim now is to attract even more donations to make it possible for another 10 Portland family members impacted by police violence to travel to Washington, D.C. to raise their voices for racial justice.

The upcoming march commemorates the 1963 March on Washington in which Dr. Rev. Martin Luther King Jr. delivered his “I have a Dream” speech at the Lincoln Memorial, but it comes with additional significance this year because of the Memorial Day police custody death of George Floyd, an unarmed black man whose “knee-choke hold” death in Minneapolis sparked continued protests in Portland and across the nation demanding action on racial justice.

Keller said because of the financial support, the march is going to include individuals from several Portland families that “know the pain” of what it is like when a son or daughter is murdered at the hands of police, like when his son, Deontae J. Keller was shot in the back, handcuffed and left to die by then Portland Police Officer Terry Kruger 24 years ago.

Keller said that while the ultimate goal is to change the hearts of Americans when it comes to taking action to stop racial injustice, participating in the march is expected to be part of the healing process for family members still struggling over the loss of their loved ones.

Donations are still being accepted to help make the visit to Washington, D.C. a reality for the Portland families who wish to attend. You can give financial support by visiting the Go Fund Me site http://gf.me/u/x7ywtj.

So far, a generous contribution of $5,000 from Don’t Shoot Portland, the organization led by Teressa Raiford, is the largest and only donation received from organizations representing the black community, Keller said. Raiford, who just finished an unsuccessful campaign for Mayor in the May Primary, also gave an additional individual contribution of $500. Former Portland City Commissioner Randy Leonard donated $100.