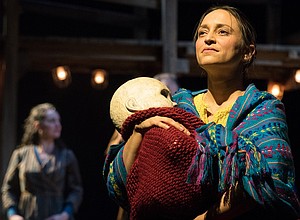 I am among those who believe theater will come back strong--indeed, stronger--after this pandemic. It is in the nature of artists, and none more than theater artists, to find the light in the darkness, to innovate, to expose the truth that no one else can see. And that's what it will take to revive the world of theater.

For now, theaters are dark, and countless beautiful productions stopped just after they opened or before they got off the ground. The pain from those losses runs deep, and those who live to create this art form are suffering much more than a temporary loss of income. I for one hope that we will find the public will to sustain some support for theater artists over the coming months and to bring theater back strong.

While we wait for that to happen, there is a particularly bright spot of consolation emanating from the Oregon Shakespeare Festival for the next few days. A filmed version of its world premiere of "The Copper Children" is available to stream from OSF's web platform, O!, through July 15, and even in this diminished form, the play is absolutely unmissable.

Commissioned as part of OSF's American Revolutions cycle of plays, which document significant moments in American history, this new play explores a case that was notorious in its day but is little-known today. The play is set in 1904 in an Arizona mining town with deep racial and economic divides between the Anglos who run and work the mines and the Mexicans who also work the mines but at a fraction of the pay the Anglos earn. It is common for families on both sides of the divide to suffer infertility, miscarriages, and infant deaths due to environmental degradation related to the mining.

Meanwhile, in New York, Irish people are the poorest of the poor, and thousands of abandoned Irish children overwhelm a Catholic orphanage. Desperate to find Catholic homes for the children to save their immortal souls, the orphanage seeks families in the American Southwest to adopt the children and, from an uninformed distance, the Mexican families in the mining town, poor as they are, seem perfectly suited.

As assembled by playwright Karen Zacarias, what follows is a conflict that contains all the earmarks of oppression. Catholics were then an oppressed group themselves, and the Irish were not considered white but rather were treated as scum. But once the childless Anglo residents of the mining town see Irish children being offered to "dirty Mexicans," the children become beautiful, blue-eyed angels with skin the color of snow, and they take the children by force. The foundling children become pawns in a culture war among people, all of whom are suffering (though differently) from the effects of capitalist greed and economic degradation. In the end, the children end up with Anglo families, and the ensuing lawsuit (culminating in what was termed the "trial of the century") is framed as a dispute between the Arizona mining community and the Catholic orphanage; the Mexican families are described in damning terms, but no Mexican testifies or even is allowed into the courtroom. Their losses don't register at all.

As conceived by Zacarias and staged by director Shariffa Ali, the play is spare and stylized, with each of the actors playing multiple roles and conveying the story's shifts in energy, power, and tone with music and movement. No actual children appear in the play; one important child is fittingly portrayed by a puppet, and the rest are signified by articles of clothing, allowing the actors' engagement with the "children" to capture how dehumanized they were by these events. The play moves through confusion and violence and oppressive acts of heartlessness with a sort of relentless momentum, conveying a sense of how "hurt people hurt people." These forgotten and never-really-understood events become and unimaginably perfect reverberation for endless and continuing acts of systemic racism--in the economic system, the child welfare system, the immigration system, the legal system.

This world-premiere production only played for a few performances before the pandemic forced OSF to close its doors; I was booked to see it myself a few days before it closed. I know that experiencing it live would be a different and deeper experience; the filmed version was originally produced for internal purposes (including use by understudies), not for public consumption, and isn't a complete substitute for being in the room.

But I mean it when I say that the production of this play is truly unmissable--so powerful that it climbs through the screen right into your body and heart. We need this play, right now, and bless these artists and OSF for finding a way for us to experience a sense of what they have created. It screens here through July 15: http://www.osfashland.org/shows-on-o.