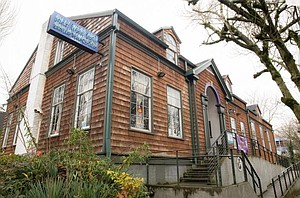 The National Park Service has recognized the historic significance of Portland’s African American experience through a pair of new listings on the National Register of Historic Places.

The first listing — African American Resources in Portland from 1851 to 1973 — is a 191-page document that elevates the eligibility of historic sites associated with Portland’s Black history for listing in the National Register. The second listing — the Billy Webb Elks Lodge — specifically recognizes the importance of the 1926 Williams Avenue YWCA building as a historical black community resource.

The Golden West Hotel at 707 N.W. Everett St. was established by African American entrepreneur William D. Allen in 1906 and provided short and long-term lodging to Black clientele who were otherwise denied accommodations at the city’s white-owned hotels.

The designations follow three years of coordinated research, documentation and writing by city staff, community members and cultural resource experts to recognize — not just the physical artifacts of Black history in Portland — but the cultural associations that make them important.

Particularly for Portland’s Black population, which has endured displacement several times over, the significance of longstanding businesses, churches, fraternal organizations, and other cultural and community touchstones cannot be underestimated.

E.D. Cannady and Beatrice Morrow Cannady, editors of the newspaper The Advocate, resided at this home at 2516 N.E. 26th Ave.

Stephanie Whitlock, executive director of the Architectural Heritage Center and contributor to the listings application said, “Many African American properties that could have been candidates for National Register listing have already been demolished. Even more important buildings and other resources risk disappearance from the landscape and from our memory, unless we take steps right away to identify, designate, and protect them.”

Dean’s Beauty Salon and Barber Shop at 215 N.E. Hancock St. was established in 1954 by Mary Rose Dean and her husband Benjamin Dean.

The Dude Ranch at 240 N. Broadway was a popular African American nightclub in the 1940s. The venue was popular amongst both white and Black Portlanders during World War II and shortly thereafter.

The Billy Webb Elks Lodge on the corner of North Williams Avenue and Tillamook Street is one such place, and marks the first listing to occur under the sites listed in the 191 page document. In addition to recognizing the importance of historic buildings and districts, listing in the National Register provides demolition protections and eligibility for financial incentives, such as grants and tax benefits.

Since its establishment in 1966, more than 700 Portland places have been listed in the National Register, ranging from iconic landmarks like the Bagdad Theater to unique areas like the Skidmore/Old Town District. But prior to the National Park Service’s announcement this week, only three of Portland’s 700 National Register sites had been designated for their association with African American history.

The now-approved framework under which properties significantly associated with the Black experience in Portland can be listed in the National Register is based on their cultural — rather than architectural — significance, including business, journalism, religion, and civil rights.

“This is another step toward equity,” said Historic Landmarks Commissioner Derek Spears. “We need to continue to identify and remove barriers, allowing all communities equal access to protect their presence as we continue to strive for justice."

The Bureau of Planning and Sustainability initiated the historic recognition project in 2017 following directives in the Portland African American Leadership Forum’s People’s Plan, which called on the city of Portland to “recognize cultural significance as a necessary component of assessing historic preservation targets.”

In addition to building on the previous scholarship of African American historians and the venerated 1998 report Cornerstones of Community, the expansive research, documentation, and writing was made possible by the dedicated efforts of historians Kimberly Moreland, the late Cathy Galbraith, Raymond Burell III, Kerrie Franey, Matthew Davis, Caitlyn Ewers, and many others.

The individual listing of the Billy Webb Elks Lodge stemmed from a request received from Lodge members.

The Billy Webb Elks Lodge designation celebrates not only the history of one of Portland’s most important Black fraternal institutions, but also a building that previously served as a “Colored” YWCA, African American USO center, and Portland branch headquarters of the NAACP.

Built in 1926 at 6 N. Tillamook St. when Portland’s Black population was just over 2,000, the Elks Lodge remains owned, operated, and occupied by the African American fraternal society to this day.

Said Lodge Exalted Ruler Louis McLemore, “The awarding of this historical designation will mean a lot to the Billy Webb Elks Lodge membership for their hard work and efforts to keep the past in mind while looking toward the future of this community and the Lodge.”

The Lodge intends to leverage their recent listing in the National Register of Historic Places to secure additional funding for physical improvements to the building and relief from lost rental income due to the coronavirus pandemic.

"It’s great to see the National Park Service approve the long-deserved historic designation of the iconic Billy Webb Elks Lodge,” Mayor Ted Wheeler said of the decision to list the Lodge in the National Register. “The honoring of Black history by our public institutions is long overdue.”