I-5 Project Moves Ahead Amid Outcry 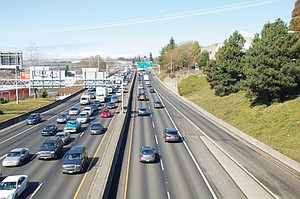 The Oregon Department of Transportation has hired a construction manager and general contractor with the task to help make the proposed I-5 Rose Quarter Improvement Project one of the most fruitful in terms of benefiting minority workers and disadvantaged business owners.

An announcement to award the construction contract to Hamilton Sundt A Joint Venture, in association with Raimore Construction, a Black-owned Portland firm, adds important partners to help design and build a project that is founded on community input and values, ODOT officials said.

The plans announced last week, however, leave out any immediate proposed changes to the project in response from Mayor Ted Wheeler, City Commissioner Chloe Eudaly and Albina Vision, a non-profit focusing on revitalizing the Albina area to right historic wrongs, and who all recently announced they have withdrawn support for the project as currently outlined.

Like Eudaly, Multnomah County Commissioner Vega Pederson, has stepped away from a community steering committee overseeing the project because of the controversy. Metro President Lynn Peterson says she is also opposed and has pledged her support for Albina Vision Trust.

Under plans approved by the Legislature, ODOT has authority to spend $715 million to widen Interstate 5 near the Rose Quarter to fix a bottle neck and make improved neighborhood transportation links with freeway caps that provide new pedestrian and bike paths and green spaces.

ODOT has rejected the added expense to make the freeway caps adaptable to building structures, like new affordable housing and commerce, estimated to increase the cost to $1 billion and a step in the direction of making accommodations to a Black community still suffering from their displacement by Urban Renewal in the 1950s, 60s and 70s.

Albina Vision said ODOT’s overall planning fails to redress the damage done to Portland’s Black community by the initial construction of I-5 nearly six decades ago.

“We can no longer support the project,” said Winta Yohannes, managing director of Albina Vision Trust, in a June 30 email to the Governor’s office and ODOT.

ODOT maintains the project meets its “values-based” priorities for restorative justice to the black community because it will generate new wealth in the community by imposing contracting goals of 18 to 22% use of disadvantaged business enterprises; and workforce hiring to include a 20% goal for apprenticeships, 25% minority male hires and 14% female workers.

ODOT says the project will also continue to rely on community input to shape the project and the outcomes for the community.

“Having the Construction Management/General Contractor on board early in the design process is a key step toward those commitments, ODOT official said.