In Solidarity with George Floyd 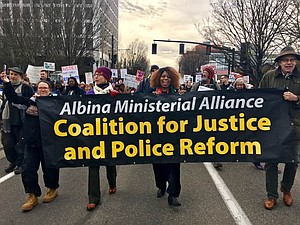 (The following statement by the Albina Ministerial Alliance was issued Monday in connection with the Memorial Day death of George Floyd in Minneapolis and other deaths of black Americans at the hands of police, including Portland.)

The Albina Ministerial Alliance, one of the oldest ministerial alliances in the city of Portland, stands in solidarity with George Floyd’s family and the grieving Citizens of Minneapolis.

The inhuman murder of George Floyd by a police officer placing his knee and body weight on Floyd’s neck for nine minutes while two other police held his legs down was a crime against humanity by those who have sworn to protect and serve. Floyd’s unjust murder by Minneapolis police officer follows the line of Black men and women’s unarmed and unjustified deaths.

There is a deep, dark frustration and righteous anger on the continuing targeted death of persons in community of colors – especially Black men and women.

Yet, we must stay focused on the case(s) and not be diverted by those who infiltrate marches to exploit their agendas of looting, burning and destroying property. These individuals and groups act as provocateurs to divert the just cause of the murder of George Floyd by police officers.

We call upon the members of the community to separate themselves from those who want to loot, burn, steal and harm.

But unite with those who want to non-violently protest the killing of George Floyd and others by police officers.

Justice is the foundation of our democracy and the God we serve is a God of justice.

The Albina Ministerial Alliance was formed during the 1960s as part of the Civil Rights Movement to provide a greater voice to the people of color in NE Portland whose needs were and are often overlooked by city and civic leaders.