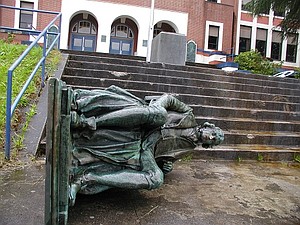 A historic bronze statute commemorating the namesake for Portland’s Jefferson High School was toppled over after a protest of police brutality and racism descended on the north Portland school Sunday night.

A crowd of several hundred people had gathered for a peaceful protest to hear speeches and a planned march to Alberta Park, located several blocks to the east on Northeast Killingsworth Street. But when the demonstrators moved away from the school, another splinter group descended and tore down the statute, school officials said.

Automobile tire tracks could be seen nearby, indented into the all-weather athletic track that surrounds the football field, the apparent evidence that a vehicle was used to help pull the statute down.

Calvert acknowledged that in recent years both the statute and name for the school have become more controversial because of the historical context to Thomas Jefferson, the nation’s third president and the author of the U.S. Declaration of Independence, but also a slave owner.

Some members of the school community have advocated for the statute’s removal, others want the Jefferson High School name preserved because of its long history as Portland’s most diverse high school serving African American families for generations.

In the past several years, the school has had a number of discussions about removing the statute and/or changing the school’s name, but black residents and others had differing opinions and no long term determination was ever made, Calvert said.

The latest “action” to remove the statute without permission by protesters, puts the issue back before the school community and neighborhood, Calvert said.

“We’re working it through,” she told the Portland Observer. “It’s complicated. It’s important to listen to the black community. We have to unpack what’s going on. The goal is to heal ultimately.”

Calvert said the nightly protests against unjust racism and police brutality in Portland, entering the third week after the police custody death of George Floyd in Minneapolis and other killings of African Americans at the hands of police, “Is bringing racism into focus. We are in a defining moment.”