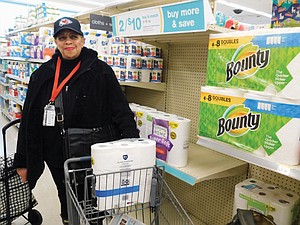 As people became more aware of the threat of coronavirus, also called COVID-19, Portland area grocery stores saw toilet paper and other supplies sell out and leave shelves virtually empty. An employee of the Stadium Fred Meyer store on West Burnside Street, where only a few boxes of tissues or stacks of toilet paper remained on the shelves Saturday, said the store has been out of hand sanitizer for weeks and didn’t know when more would come in.

By Monday, other stores, including Natural Grocers and Walgreens, both on Northeast Martin Luther King Jr. Boulevard, also saw empty spaces on toilet paper aisles and with no hand sanitizer for sale.

As she shopped for bathroom tissue at Walgreens, Levlie Okammor said she is worried about the possibility of a pandemic sweeping the country.

“This is going to be big, and I’m worried that people are not taking it seriously,” she said. “We’ve just gotten to be a country that is not informed, but I’m not listening to anything that’s coming out of Washington. I heard the head of the CDC (Centers for Disease Control and Prevention) say it’s not a matter of ‘if,’ but ‘when.’”

Okammor said she has been following the coronavirus epidemic from the beginning.

“When I heard there was a case in Washington State, I thought, ‘This is it,’” she said. “We are not prepared and we are not an educated country anymore.”

Near empty shelves of toilet paper are seen Monday at the Natural Grocers on Northeast Martin Luther King Jr. Boulevard as shortages of everyday supplies are becoming common sights at Portland area stores as people prepare to stay at home if they get sick or find the spread of the coronavirus gets much worse.

As of Tuesday, nine people in Washington State have died of the disease, eight from King County and one from Snohomish County, state health officials said. A total of 118 people in the United States have been diagnosed with the disease, according to authorities.

At a news conference earlier Monday, King County Executive Dow Constantine issued an emergency declaration for what has become the epicenter of a coronavirus outbreak in Washington state.

Constantin said the county is buying a local motel where patients with mild symptoms, or those who require isolation pending confirmation, can be housed and free up space at hospitals for more critical patients. Workers will also set up modular housing to house people throughout the county, he said.

Oregon’s first presumptive case of coronavirus was an adult who worked at Forest Hills Elementary in Lake Oswego and may have exposed students and staff at the school. The person has been isolated and is being treated in a local hospital and the school will reopen later this week after being closed for deep cleaning.

A second case reported involved a Washington County adult who was a ‘household contact’ with the first person with coronavirus. The adult did not require medical attention and is isolated at home, authorities said.

The third presumptive case of exposure involves a casino worker who attended a youth basketball game at a middle school in Umatilla County, the Oregonian reported, and quoted Dr. Dean Sidelinger, the state’s health officer, as saying that while the virus will continue to spread in Oregon, the health system is prepared.

Others are making preparations at the local level, and on Monday, just before the start of a Meals on Wheels lunch at the Urban League of Portland’s Multicultural Senior Center on Martin Luther King Jr. Boulevard, staff member Kashea Kilson Anderson gave safety tips on how to prevent exposure to COVID-19.