Living and Working in a White Homeland

A challenge to be heard and recognized 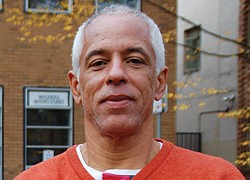 I moved to Portland in 2005 to start my job as an assistant professor in the Black Studies Department at Portland State University. I had never been to the city previously, but had visited the Salem area as a teenager because I had relatives living there. When I got to PSU, Darrell Milner, the senior faculty in the department gave me a book called Peculiar Paradise, which I read from beginning to end immediately. It helped me develop a beginning picture of the state. My primary reason for moving to Portland was that I was relatively close to my family in Oakland, Calif. I also liked that there were many outdoor activities that you could do in and around the city. I grew up backpacking, skiing and going to the beach. Lastly I liked the idea that I could be a part of a Black Studies Department. My academic work was focused on the educational experiences of Black people in Oakland and Esmeraldas, Ecuador. Esmeraldas is a province where Black people make up the largest proportion of the population and was where I conducted my dissertation research.

The thing that struck me the most upon moving here was the small number of Black people compared to where I was from. I tell my students that I had a Black dentist in Oakland. I would bet that there are not more than five black dentists in the Portland Metro area. What I have also noticed is that there are even a smaller percentage of middle class Black people in Portland compared to Oakland and the Bay Area. I would explain this as primarily due to Black people’s lack of access to public sector employment, such as working in city, county, state and federal jobs that are stable and offer middle class wages. In other large urban areas across the country, Black people have been able to gain access to these institutions in ways they have not in Portland.

Numbers matter. As a result of Oregon being the only state in the Union to have in its original constitution include an exclusion law barring Black people from living in the state, few Black people saw Portland as a viable option to migrate to from the South as they did California and Washington, whose Black populations are much larger. Too, it took until 1974 for Oregon to overturn its denunciation of the 14th Amendment which provided formal citizenship to Black people in the United States. The state had passed the amendment in 1866 but then rescinded it in 1868. That sent a clear message to Black people that Oregon did not welcome them, not to mention the Ku Klux Klans’ takeover of the state legislature in the 1920s. As a result, Oregon has the smallest number and proportion of Black people on the West Coast. PSU historian Carl Abott has demonstrated that because of past policies Portland is numerically and culturally white. He also shows that the small number of Black people living in the city means that they (we) have to organize differently as a result. We are much more dependent on white philanthropy and altruism than in other regions, where greater numbers bring more positive results in electoral politics, political activism and other forms of resistance, helping Black people not only gain access to public institutions, but also become primary actors within them.

This does not necessarily mean Black people are worse off in Portland compared to other parts of the country, however, there are indications that Black people here do experience forms of inequality that set Portland and Oregon apart from the nation as a whole. A recent article demonstrated, for example, that Oregon has the highest pushout rate for Black high school youth in the country (I prefer pushout to dropout because it puts emphasis on practices of exclusion within and outside schools rather than on some problem inherent in Black people). In addition, Portland has higher rates of incarceration and homicide. As pushout, incarceration and homicide are forms of exclusion, we can say Portland continues tp legally to exclude Black people as citizens of the state. If you do not graduate high school, are incarcerated or murdered the obstacles for you to participate as a citizen are at best curtailed and at worst eliminated. Besides these statistical data, my teaching experience gives me a perspective on the experiences of local Black youth. Virtually every Black male I have met in Portland has been stopped by the police, been called the N word and have experienced multiple forms of explicit and implicit forms of anti-Black racism. My point on Black males is not to be exclusive of Black women, but to highlight the disproportionate impact the ‘educational’ and criminal injustice systems have on Black males in the Portland area. Black women have to deal with us being locked up and pushed out disproportionately and the consequences of that which I don’t diminish. They are two sides of the same coin.

Beyond irony, Portland also benefits from having the reputation of being the most politically progressive city in the country. How, one might ask, is this possible? I actually connect Portland’s politically progressive reputation to the original exclusion of Black people. Because of the impacts of Black exclusion and its continuance in Portland, the city did not have to confront the large migrations of Black people out of the South and subsequent Black struggles with housing, employment, transportation and education as compared to Oakland, Los Angeles and even Seattle. The weight or what some might refer to it as the hydraulics of Black resistance to anti-Black racism in Portland did not cause white flight, flight of capital and the associated suburbanization that happened in other large metro areas because our numbers were and continue to be so small. Thus, in comparison with other large urban areas, Portland has relatively a system of strong schools, libraries, transportation and housing because white people stayed in the urban center. I jokingly tell my students also that Portland is progressive because you can smoke weed here legally, ride your bicycle naked with thousands of mostly white Portlanders, and even call an animal civil rights attorney if you see someone treating their dog badly. Yes, Oregon is, as far as I know, the only state that has an animal civil rights attorney.

I’ll end this piece with an anecdote. When I first moved here a friend of a friend invited me over for dinner. She was married to an engineer who graduated from U.C. Berkeley. We were making small talk and her husband asked me what I do. I told him I worked in the Black Studies Department. He asked me what courses I taught and I said I was currently teaching one called Racism. He responded, “Oh , we don't have that problem here.” This well-educated middle class white man who thought of himself as progressive had found it in himself to somehow not see what was so evident before him; nor think it a problem to say to me, a scholar of racism, that he knew more than me. Here, in Portland, often this is what defines the context we struggle in. The lie of political progressiveness makes invisible to many white people that anti-blackness exists. Our small numbers and small voice makes it challenging to say the least to be heard and recognized in this context.

Ethan Johnson is chair and associate professor of the Black Studies Department at Portland State University.