Trying to Slow an Epidemic 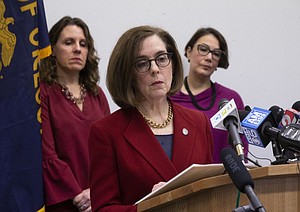 Portland and Vancouver have their first deaths attributed to the worldwide coronavirus epidemic, or COVID-19. A 70-year-old man with underlying health conditions died on Saturday at the Portland Veterans’ Affairs Medical Center and two Clark County COVID-19 patients died Monday evening, according to state and county health authorities.

As of Tuesday, Oregon had a total of 66 people diagnosed with COVID-19, but that number was expected to grow significantly. Oregon Gov. Kate Brown issued an order to limit crowds of 25 people in an attempt to slow the spread of the virus. She also ordered restaurants and bars to either shut down or serve take out only. The latest measures followed her order on Thursday to close all schools until the end of the month.

The aim of health authorities is to try to flatten the curve of new infections to alleviate a feared surge of sick patients that could overwhelm the health system. Authorities are making strong efforts to promote social isolation and social distancing as a way to prevent the spread. For the next month, people are urged to avoid being around more than 10 people at a time.

Portland Police Chief Jami Resch Monday directed officers and supervisors to contact members of the public by phone when possible, but stated that police will continue to respond in person to disturbances such as thefts in progress, burglaries, welfare checks and injury vehicle crashes, and detectives will continue to investigate crimes.

Government offices across Portland and Vancouver have closed as employees work from home. And nonprofits are also cutting back client contact. Meals on Wheels People is facing many challenges and is taking the further precaution of no longer offering even take out meals at its dining centers, according to spokeswoman Julie Piper Finley.

“All of our dining centers are closed and we are not distributing meals to diners and diners cannot pick up meals. If they have no other source of food, they can register for Meals on Wheels delivery,” she said.

Finley says many volunteer drivers have backed out of making deliveries, so more volunteers as well as more bags with handles are needed. One hitch in getting more volunteers to make home deliveries, is that all drivers must pass a criminal background check, which normally takes about three weeks. She said efforts are being made to shorten that time or to use people who have already passed background checks, such as teachers.

The nonprofit also needs donations of hand sanitizers, anti-bacterial wipes and plastic gloves. Donations of this type can be brought to the Meals on Wheels Central Kitchen at 7710 S.W. 31st Ave. in Portland.

Finley stressed that if people can cook at home or get food from any other source, like restaurant take outs, they should.

The Urban League of Portland, one of the oldest African American service, civil rights and advocacy organizations in the area, is also redefining how it offers its services. The nonprofit will not hold in-person walk-in hours and will maintain at least six feet of social distancing along with enhanced hygiene procedures.

Starting on Monday, March 23, all Urban League offices and satellite locations will be open by appointment only. In addition, in response to guidance from Oregon Health Authority, the Urban League is cancelling all planned gatherings, including daily activities at the Multicultural Senior Center, parenting groups, upcoming Zumba classes, and the Rent Well series. The annual Urban League Career Connections Job Fair, previously scheduled for April 7, has been canceled.

Hospitals are also limiting contact between people, and the Legacy Health hospital system announced that unless accompanying a patient, the general public is not allowed inside Legacy medical center until further notice, including cafeterias, waiting rooms and other indoor and outdoor meeting spaces. There are a few exceptions.

“It is important that we initiate these safeguards to protect our patients, staff and the public,” said Brian Terrett, director of public relations and community relations for Legacy Health.

Many other organizations and health providers have taken similar steps to limit people-to-people contact, and readers should call or email agencies whose services they use to find out what their policies are and not rely on websites alone.