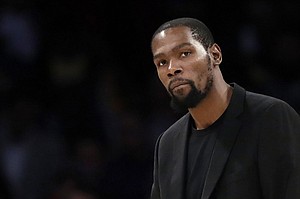 (AP) — Celebrities, politicians and professional athletes faced a backlash this week as many revealed that they had been tested for the coronavirus, even when they didn’t have a fever or other tell-tale symptoms.

That’s fueling a perception that the wealthy and famous have been able to jump to the head of the line to get tested while others have been turned away or met with long delays.

The concerns over preferential treatment underscore a fundamental truth about inequalities baked into the American health care system — those with the financial means can often receive a different level of service.

On Wednesday, the Brooklyn Nets professional basketball team announced the entire team was tested last week upon returning from San Francisco after a game against the Golden State Warriors. The team found a private lab to do the work, and on Tuesday announced that four of its players were positive for the virus, including perennial All-Star Kevin Durant.

Even though public health resources were not used, it raised the ire of many, including New York Mayor Bill de Blasio.

“We wish them a speedy recovery,” the mayor wrote on Twitter. “But, with all due respect, an entire NBA team should NOT get tested for COVID-19 while there are critically ill patients waiting to be tested. Tests should not be for the wealthy, but for the sick.”

The 30-year-old has fibromyalgia and an autoimmune disorder that put her at high risk for complications if she contracts the virus. She’s been running a fever and coughing since last week. Her doctor recommended she get tested at the emergency room, but there she was told there weren’t enough tests, so she can’t get one.

Fraser has seen celebrities and politicians getting tests, and that upsets her.

“Why are they getting in front of the line? People like me, average Joes, we get pushed to the back of the line. Why can Congress get it and we can’t?” she asked.

Public frustrations over the difficulties getting tested for the new virus have been building since the first U.S. case was confirmed Jan. 20. Early missteps with test kits developed by the Centers for Disease Control and Prevention, coupled with strict government criteria about who qualified for screening, have led to widespread reports of people struggling to get tested. Even those who manage to get successfully swabbed often report long delays in getting the results back due to lengthy backlogs at government-run labs.

Seeking to break the logjam, the federal Food and Drug Administration announced earlier this month it would allow major private diagnostic lab companies to begin rolling out new COVID-19 tests and relaxed regulations typically required before new tests can be brought to market.

Over the last two weeks, that has led to a surge in testing available from private doctors and labs not bound by CDC’s criteria for which patients should be prioritized for testing, such as those with fever and difficulty breathing who have recently traveled to affected countries overseas, or those who have had close contact with someone confirmed to have had the virus.