Says state is far from having its needs met 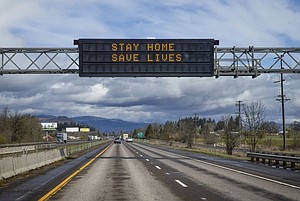 (AP) -- President Donald Trump Sunday approved a major disaster declaration for Oregon due to the coronavirus outbreak, but Oregon Gov. Kate Brown, while welcoming the announcement from the president, says the state is far from having its needs met in response to the public health crisis.

Gov. Brown declared a state of emergency on March 8. On March 23, she issued an executive order directing residents to stay home to the maximum extent possible and ordered the closure of retail businesses where close personal contact is difficult to avoid, such as hair salons, gyms and theaters.

Brown praised the federal declaration, but said it was “far from everything Oregon needs from the federal government to actively and effectively combat this crisis.

“We have a number of significant requests pending with the federal government, first and foremost Oregon’s request for more personal protective equipment from the national stockpile,” she said. “In addition, a significant part of our disaster declaration request was for individual assistance for all Oregon counties and tribes — including child care assistance, crisis counseling, disaster case management, disaster legal services, and disaster unemployment assistance for Oregonians. That request is still also pending, and would provide significant relief to Oregon families if approved.”

As thousands of businesses in the state have closed under the stay at home order, unemployment in Oregon has skyrocketed.

Last week it was reported that since March 15, the state has received 76,500 initial unemployment claims. That’s a sharp increase from the 4,900 claims the week of March 8, before the economic devastation of the new coronavirus took hold, the department said.

Schools are also closed until April 28.

The iconic Portland bookstore Powell’s has re-hired some of its employees to fill an increase in online orders. Owner and CEO Emily Powell thanked the community for its support.

“Your kind words, messages of encouragement, ideas for perseverance, and orders for books have taken our breath away,” she said in a statement.

The company laid off nearly 400 people on March 17 and shut all five of its bookstores. Powell said they have been able to re-hire more than 100 employees with full-time hours and benefits.

Early Sunday, the Oregon health department said the state had 548 people test positive for COVID-19, up from 479 on Saturday. The total of 13 deaths remained the same.

For most people, the coronavirus causes mild or moderate symptoms, such as fever and cough that clear up in several weeks. For some, especially older adults and people with existing health problems, it can cause more severe illness, including pneumonia and death.