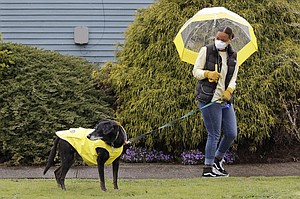 (AP) — Public health officials and researchers said Monday social distancing appears to be helping slow the spread of COVID-19 in the Seattle area, where many of the first U.S. deaths occurred, but Washington Gov. Jay Inslee says that the public still needs to be prepared for the state’s current two-week stay-at-home order to be extended.

Dr. Jeff Duchin, the public health officer for Seattle and King County, said a new analysis by the Bellevue-based Institute of Disease Modeling provides a powerful indication that the region needs to double-down on the policies it’s already adopted.

“What we’re doing now appears to be working,” Duchin said. “We need to continue this for weeks.”

Inslee issued a stay-at-home order last week that is in effect through April 6, and ordered all non-essential businesses to close through at least April 8. The latest orders expanded previous actions taken by Inslee that ordered the statewide closure of bars, dine-in restaurants, and entertainment and recreation facilities and banned large gatherings.

Inslee said that while no final decision has been made on extending the order, “it is very highly likely that there will be some further measures.”

“While we may have had some success in some parts of our state to some degree, a modest degree of bending the curve down of the rate of acceleration of the virus, we have some disturbing news in other places in the state,” he said, citing some counties, including Skagit, Adams and Island, where the percentage of tests that came back positive this week were two to three times higher than positive results in the previous week.

“It is very alarming to us, and indicates that we have to refocus our attention, redouble our efforts and stay on top of this effort,” Inslee said.

In two papers released Monday, the Institute for Disease Modeling acknowledged that much remains unknown about rates of infection, but based on available data and a variety of assumptions, its computer models suggest that a measure of transmission — an estimate of how many people are infected by each person who is already infected — has fallen. In late February, each person with COVID was infecting about 2.7 other people; by March 18, that number had dropped to 1.4, the researchers found.

They cautioned that the numbers were rough estimates; Duchin said he felt confident saying the rate of transmission is lower than it was, but he wouldn’t put much stock in the precise figure. To see a drop in the number of new cases, the measure of transmission would have to be below 1.

“The main takeaway here is though we’ve made some great headway, our progress is precarious and insufficient,” said Dr. Daniel Klein, computational team lead at the institute.

The institute also relied on anonymized Facebook data to show that people in the region have been reducing their travel in the past month, spending less time in commercial and mixed-use zones and more time in single- and multifamily residential zones.

The Institute for Disease Modeling part of the Global Good Fund, a collaboration between Intellectual Ventures and Bill and Melinda Gates. It is contributing its services to state and local governments to assist in their response to the outbreak.

“The data in the Institute for Disease Modeling report offer much needed hope that we are making progress against this pandemic, and that our strong physical distancing policies are having their intended effect of keeping people healthy,” King County Executive Dow Constantine said in a written statement.

More than 65,000 people have been tested for coronavirus in Washington, according to the state Department of Health. More than 4,800 have tested positive and at least 195 people have died.

For most people, the coronavirus causes mild or moderate symptoms, such as fever and cough that clear up in several weeks. For some, especially older adults and people with existing health problems, it can cause more severe illness, including pneumonia and death.