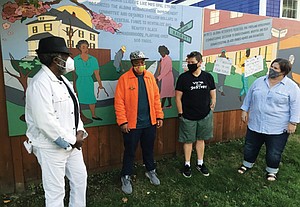 Neighbor Jackie Strong helped dedicate the murals during their unveiling and celebration ceremony. His mother, the late Opal Strong is depicted in one of the panels, a moment from 1961, when Mrs. Strong organized a neighborhood improvement committee and secured a large government grant to beatify and revitalize Black Portland neighborhoods. They planted over 500 trees including several cherry trees that Todd depicted in the mural.

Todd’s other panels depict the displacement of Black residents by urban renewal and Emanuel Hospital expansion in the 1970s; the fight to open Harriet Tubman School to specifically serve the Black community in 1982; and powerful images of resistance to racial injustices in policing. The mural ends with hope for the future by depicting two intersecting streets named Peace and Justice.

Fadyen and Frazzini enlisted Todd to create the murals along their back fence, which runs along the Haight Avenue and the Going Street walkway. The couple had been impressed by a Black Lives Matter mural Todd had recently created along another fence on Kerby Avenue in the same neighborhood.

Todd said the first mural was finished in June to honor the many people who have died at the hands of police.

It was “In all the chaos of these times,” Todd said that he decided he needed to follow his dream to make art a full time career, launching his own art business called “Art is Larger Than Me.”