National Guard called out in Portland 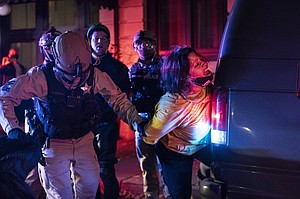 Wednesday night, one day after Election Day, demonstrators in Portland engaged in what authorities said was widespread violence downtown. Multiple protest rallies and marches took place across the city demonstrating about a range of issues, including police brutality and the counting of the vote.

Tensions ran high into the night following a mostly peaceful start to the day, but when windows started to be broken out at multiple locations by unruly demonstrators, downtown, it led to Gov. Kate Brown deploying the Oregon National Guard.

At least 10 protesters were arrested. Police said one of those arrested was armed with a gun, knife and was toting an improvised explosive device. Authorities said officers had been attacked with bottles thrown at them, and at least one Molotov cocktail.

Police were operating under the governor’s Unified Command, which consists of the Oregon State Police, the Portland Police Bureau and the Multnomah County Sheriff's Office.

"We don’t take this decision lightly," said a statement about calling out the National Guard. “Under the governor’s order, we continue to work together and share our resources and information to address any public safety concerns."

“When we stand up against injustice in our community we do so with an unwavering expectation that our businesses and critical service providers will not be targeted with property damage and that people can gather without fear of physical violence.”

“What we saw last night - the destruction of property at multiple businesses including at a female founded and women run local clothing store, at a church that provides healing and shelter, clothing, food and assistance to homeless individuals and people overcoming substance abuse and addiction and at a hotel that is committed to the revitalization of Old Town Chinatown -- is unacceptable and criminal.”

“My office rejects all forms of violence and property destruction. We are fully committed to prosecuting those individuals who engage in this conduct. We will work in partnership with law enforcement to develop cases by identifying suspects and evidence that can be used in court to ensure accountability for criminal acts occurring in our community.”

“We will always support those who participate in demonstrations absent of behavior that promotes and inflicts harm because such conduct diminishes our shared objectives of creating a stronger, healthier and more equitable community.”