The Portland Observer: Did you Know?

Felicia Slider for the Portland Observer 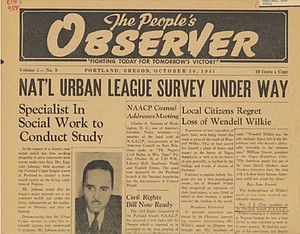 The Portland Observer was started in 1970 by Rev. Alfred Lee Henderson of Portland’s Bethel AME Church.

Joyce Washington was a child when her family moved to Vanport, the community built to house shipbuilding workers on the Columbia River during World War II. She studied sociology at Portland Community College and Portland State University.

After she took over the weekly, Washington had to run the paper out of her home for a while.

The paper's corporate name at the time, Cory Publishing, commemorated her son, Cory Washington's contributions to the paper. Cory was one of the first, and most involved staff members of the paper. He was shot to death following a basketball-game dispute in Peninsula Park in 1991, at 27 years old.

In an interview with The Oregonian in December 1995, Joyce Washington said, "We try very hard to include everybody in our paper. This is a diverse community, it's not comprised of just black people. White people make the news also, so they go on our front page too."

Another of Joyce Washington's sons, the late Charles H. Washington, was the Portland Observer’s previous editor-in-chief and publisher.

"My mother was very proud of having never missed a (publication) date; we never failed to publish an edition," Washington told The Oregonian in March 1996, when his mother died.

Upon her death, Washington's son Charles "Chuck" Washington, a Portland native and a graduate of Jefferson High School, took over as publisher until his death in December 2012

The paper was then passed on to Mark Washington who controls the paper today.