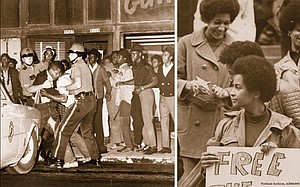 For 50 years, the Portland Observer has endeavored to inform and uplift the African American and other communities of color. With informed local reporting, photography, columns and articles dedicated to diversity and the Black experience, the publication is celebrating the past with a pledge to continue delivering solid news to our readers and viewers in the future. As the state’s oldest Black-owned newspaper, the Portland Observer plans to carry on that proud tradition for many years to come.

Like other Black-owned businesses, 2020 has been a rough year. Because of the restrictions imposed by the coronavirus, a stay-at-home order, and managing a fall from revenues, Portland Observer Publisher Mark Washington needed to take steps to reduce costs. He moved the publication to every other week and cut staff hours, but now says support is picking up and he expects to survive this crisis.

The Portland Observer as a current, on-going publication was started in 1970 by Rev. Alfred L. Henderson of Portland’s Bethel AME Church, and was taken over by Washington’s mother, the late Joyce Washington in the 1980s.

Joyce worked for Henderson in those early years as a successful saleswoman, but when he couldn’t afford to pay her commission, she came up with a novel scheme to take over the paper herself and keep it going.

“She was a salesperson but he couldn’t afford to pay her and fell behind on his taxes,” Washington said. “So she made a deal to pay off the taxes and take over ownership.”

Before coming to the Portland Observer, Joyce had been deeply involved in social services, holding a high level position with Adult Family Services, Washington said, and she brought that philosophy of helping others to her leadership of the paper.

"She had a vision of wanting to help the community since she had been doing so much with social services and welfare,” he said.

But it wasn’t easy taking over the paper, he said, and for years, Joyce published from her home’s basement on a shoestring, but everyone helped out and the paper was — and is — a family affair.

“Our family has been involved starting when I was 8 or 9 years old and I used to go the stores with my uncle to sell the paper,” Washington said.

More than anything, Joyce Washington wanted to help her community, Washington said, and that tradition carries on to this day, as the paper strives to represent the African American community and other communities of color in Portland.

“She wanted to promote families, to promote the African American family,” he said. “She would rather see an uplifting story on a local family than a politician. She was big on grassroots and I think we continue that legacy today. We have been able to make it a success but keep the value as an asset for the community, to keep it alive. She died fairly young, but then my brother Chuck took it over.”

Charles “Chuck” Washington joined the paper in 1990 as public relations director and assistant editor and took over as publisher when his mother passed away in 1996. He developed a new marketing strategy, restructured operations and was instrumental in propelling the paper into the mainstream publications and influential community voice that is it today.

Speaking about his father’s legacy when he died in 2012, Rakeem Washington said the newspaper’s role in highlighting issues and “spreading a sense of inclusiveness and diversity that he so longed for in his everyday life, just meant the world to him.”

Ethan Johnson, chair of Black Studies at Portland State University, said the Portland Observer’s role in Portland’s African American community has been extremely important over the years and relevant for serving people who need a voice.

“It’s important to have a paper that focuses on Black people locally and in the state and nation,” Johnson said.

He said the Portland Observer serves an important purpose, where people can go for information, news and other issues, but “It’s also a pleasure to read.”

“I enjoy reading the paper and can always find stuff about entertainment, sports and life that’s related to Black people. I think that’s so important,” he said.

“I can open the Willamette Week or the Oregonian, but to me, I’ve always felt like they are racist papers,” he added. “They don’t say it, but they don’t focus on Black lives and don’t report in real ways about Black people. It’s also an opportunity for Black writers to be able to speak to the communities they belong to.”

Mark Washington, carrying on the traditions started by his mother and brother, said the Portland Observer will carry on, although the future will be challenging.

“Even though we are in struggling times, the Portland Observer is celebrating the fact that we have unfailingly served the African American community in Portland in good faith and service,” he said.

“To my employees, without them I would not have been able to continue the legacy of my Mother. Thank you Michael Leighton, Paul Neufeldt, Lucinda Baldwin, Leonard Latin, Marco Washington, J. Markiw, Beverly Corbell, Shawntell Washington, Quayuana Washington and Felicia Slider.”