Lillard Goes Into the Car Business 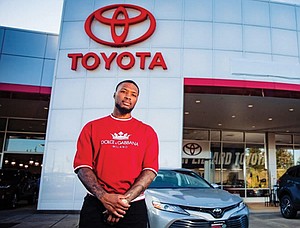 Portland Trail Blazers point guard and NBA All-Star Damian Lillard is now a business owner to go with his accomplishments on the court.

It was announced last week that Lillard and his longtime friend and business partner, Brian Sanders, are now the co-owners of a Toyota dealership in McMinnville. A ribbon ceremony was held at the dealership Wednesday.

A Toyota representative said Lillard has "infused his style into the facility by overseeing the installation of custom Pop-A-Shot games, themed pingpong tables, autographed memorabilia, and more."

Customers who purchase a vehicle from the dealership will become members of the "Damian Lillard VIP Club," which includes opportunities to meet Lillard and attend Trail Blazers games.