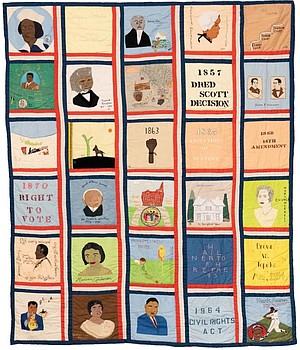 The Oregon History Museum reopened to the public Wednesday, three days after windows to the downtown museum were broken and a historical African American quilt was stolen during a violent protest billed by organizers as day of “rage” toward Columbus Day.

The Afro American Heritage Bicentennial Commemorative Quilt, created in the mid-1970s by 15 Black women from Portland and honoring Black individuals or moments in history, was taken from the lobby of the museum during the vandalism on Sunday, Oct. 11, but was recovered by police in a condition soaked by rain inside a nearby park, officials said.

Oregon Historical Society Executive Director Kerry Tymchuk said the museum has received an outpouring of community support in response to the destruction.

“While windows can be replaced, our greatest concern has been for the Afro-American Heritage Bicentennial Commemorative Quilt, which was taken from its display in our pavilion,” Tymchuk said. The quilt will remain off public display for the time being as museum officials dry out the material and assess any other care needs. Although it was wet, the quilt is otherwise intact. However, there has been color bleed of the fabric due to moisture, which will require the attention of conservation specialists.

Tymchuk said the Oregon Historical Society understood the significance and importance of messages of injustice fueling protests in Portland and across the nation since the killing of George Floyd by police officers in Minneapolis last Memorial Day.

He said the OHS museum has demonstrated its commitment to telling the honest history of Oregon and was dismayed it got caught up in damages to several other buildings and businesses on the night of the protest.

“In 2019, we opened a new cornerstone exhibition, Experience Oregon, in collaboration with many community partners, including the nine federally recognized Tribes in Oregon, and the result demonstrates our commitment to telling honest Oregon history — the good, the bad, and the ugly,” Tymchuk said. “We dedicated the Winter 2019 issue of our journal, the Oregon Historical Quarterly, to the subject of “White Supremacy & Resistance,” and in the Summer 2020 issue, we published articles specifically related to OHS’ history as related to Indigenous leaders and belongings.”

Tymchuk said the museum has received new memberships and donations to support its clean-up effort, but said none of the support has affected him as much as a gift from a neighbor named Oscar.

In a note that accompanied a $1 donation, Oscar wrote: “Hello, I’m homeless so I don’t have much to give you, just some of my bottle collecting money. But I saw your windows got broken and wanted to help. You once gave me a free tour before the pandemic, so this is a thank you.”

“In my time as executive director, I have seen OHS receive truly incredible gifts — but this one has touched my heart tremendously,” Tymchuk said.