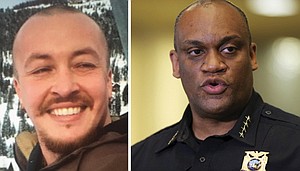 A supporter of a right wing group was killed in a confrontation downtown Saturday, the first deadly consequence amid three months of protests over racial injustice in Portland and across the nation.

Portland Police responded to shots fired in the area of Southwest Third Avenue and Southwest Alder Street around 8:45 p.m. where they located the body of Aaron “Jay” Danielson, 39, a Portland man.

Video circulating on social media give some insight to the shooting, with recorded sounds indicating there may have been a confrontation between the protester and shooter with toxic bear spray deployed before shots rang out. It happened after a rally by counter protesters to those associated with Portland’s Black Lives Matter movement. Displaying pro Trump flags, hundreds of the conservative protestors gathered at Clackamas Town Center and then moved toward downtown in pickups and big rig trucks, with some openly carrying guns and others firing paintballs into people on the street.

Authorities said Danielson and a friend were seen heading downtown to join the Trump supporters. They wore hats with the insignia of Patriot Prayer, a group that has clashed with left-wing protesters in Portland for years, and appeared armed with knives and paintball guns.

Police Chief Chuck Lovell asked the public to give the detectives time to do their important work before drawing conclusions about the shooting.

"If anyone can provide information about this case, I ask them to please reach out to our detectives. This violence is completely unacceptable and we are working diligently to find and apprehend the individual or individuals responsible," Lovell said.

In cellphone video of the shooting, both Danielson and his assailant were seen on a darkened street. At least three shots rang out in a smoky haze, followed by images of Danielson crumpled on the ground as a friend, Chandler Pappas, slaps him in the face and rolls him over, yelling “Jay! Jay!”

“He was a good man and he was just killed senselessly for no reason other than he believed something different than they do,” Pappas told supporters during a rally Sunday. “He was Christian. He was conservative.”

Ex-girlfriend Christine Banks said Monday Danielson didn’t discuss politics much but of the weeks-long protests in Portland: “He didn’t think it was right. ... He was there for peace.”

Critics have said that instead of keeping the peace, Patriot Prayer has helped incite violence. Last month in nearby Gresham, Pappas showed up to counter a Black Lives Matter event and, according to the Portland Tribune, declared: “I came here ready for war.”

Portland police have yet to make an arrest. On Monday, they asked for witnesses and those who had taken video of the scene to contact them.

A small memorial to Danielson took shape Monday on a sidewalk in front of the parking structure where he collapsed. It included four yellow daises tied to a tree, a small American flag flapping in the wind, and a sympathy card with a Bible verse and handwritten note.

“Jay went to Jesus, where will you go?”

--Associated Press contributed to this story.