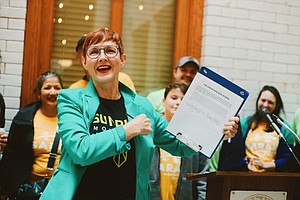 Sarah Iannarone is showing off some impressive support from the local Black community in her runoff election for Portland mayor on Nov. 3.

Iannarone released a slate of endorsements Monday that included several leaders from the African-American community, including former Multnomah County Commissioner Loretta Smith; Cameron Whitten, the co-founder of the Black Resilience Fund and former executive director of the QCenter; James Posey, co-founder of the Oregon chapter of the National Association of Minority Contractors; and Shanice Clark, a local educational leader and member of the Portland Clean Energy Fund Grant Committee.

“I love this city, but Portland’s shared vision of a sustainable, livable hometown is slipping from view. The current mayor’s record is full of broken promises on solutions for houselessness and inequality. He’s shown no leadership on civil unrest or public safety. On his watch, things keep getting worse. It’s time for a change,” Iannarone writes on her campaign website.

From the list of her supporters, Smith, called Iannarone the “visionary leader” Portland needs to bring people together “to ensure that we build our city back better than it was before COVID-19.

“From her plans to aggressively tackle police reform to her commitment to developing housing that is truly affordable, Sarah is the leader Portland needs to ensure that everyone has the opportunity to thrive – regardless of their zip code,” Smith said.

Whitten said his support for Iannarone was based on her “unquestionable commitment” to making a better future for all Portlanders.”

Green said Iannarone’s “deep roots in Portland's small business community will give city hall a boost in helping the city to support local firms to not only navigate the pandemic but to also become more resilient after it is over.”

Iannarone Campaign Director Gregory McKelvey, a Black Lives Matter organizer himself, celebrated these endorsements saying that, “It was unprecedented for a viable candidate for Portland Mayor to select someone known primarily as a Black Lives Matter activist to run such a prominent campaign. Sarah did so long before the current uprising because she is committed to ensuring that Black lives matter in our community and that the common-sense progress Portlanders are demanding becomes a reality.”