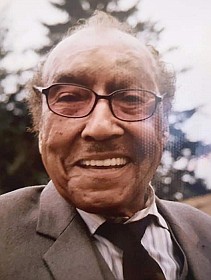 Charles H. Abraham Lyles, 93, passed away peacefully on Thursday, April 15, 2021 at his home in Portland.

Charles was born to the late John Lyle and Mary Packnett (Lyle) in Natchez, Miss. on May 19, 1927. He was preceded in death by brothers Sylvester, John Jr., and Richard Lyle, and sisters Mary, Hattie Mae, Rachel (St.Obria) and Henrietta Lyle.

A proud husband, father and grandfather, he leaves a beautiful legacy for his daughter, grandchildren and great grandchildren.

Charles graduated from school in Natchez and later joined the military. He was a decorated veteran and served in the US Army, 3rd Infantry Division in the Korean War, 1950-1953. After receiving an Honorable Discharge from the Army, Charles later moved to Sacramento where he earned a real estate business license, and later moved to Seattle where he started his own business, Lyles Roofing & Remodeling. He worked and retired as a successful contractor in commercial and residential roofing for over 40 years. He also met and married the love of his life, Veester Turner, in 1977 and shortly thereafter to this union they welcomed their daughter, Veester St.Obria.

As an active and dedicated member in the Christian community, Charles attended Lighthouse Missionary Baptist Church, St. James Pentecostal, Emmanuel Temple, Lifeline Christian Church, and Evangelical Christian Family Church, and served as a pastor at Prayer Tabernacle. In addition to pastoral leadership, he served in television ministry and was the author of two books, including "Miracles And More In My Life."

He also was well known as a community activist, from working alongside members of the Black Panther movement to championing civil rights and providing a strong voice for the voiceless. He held many Tent Church Revival meetings throughout California and Oregon, leading both young and old to Christ. He believed in family, prayer and unshakable faith. He was a spiritual father to many. He lived his life in legacy by Psalm 27: The Lord is my light and my salvation.

Charles is survived by his wife, Veester Lyles (Turner); daughter Veester St.Obria Lyles Patterson (Darryl); granddaughters Deriana (Che), Desarae, (Isaiah), Dejanique, Darchelle, Demia, and Demaya; grandson Avreaunte; and six great grandchildren. In addition, he leaves a sister, Lucy Perry; spiritual daughter, Tracee Wells; spiritual son John Henry; a host of nieces, nephews, cousins, and other close extended family members; the family of faith; as well as an endless list of church and community members. He will be greatly missed but we rejoice in knowing that he is reunited with the Lord.

A public viewing will be provided by Terry Family Funeral Home on Wednesday, April 28, from 4 p.m. to 7 p.m. with a Celebration of Life service to follow on Thursday, April 29 at 11 a.m. at New Song Community Church.