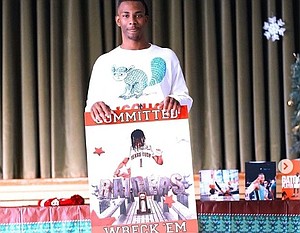 Lamar Washington, a former Jefferson High School basketball standout and Oregon High School Basketball Player of the Year, has decided on Texas Tech as his future college destination where he will play basketball.

The six-foot-four guard is listed as a four star recruit by ESPN. He currently is a senior at AZ Compass Prep in Arizona, and previously at Jefferson was the 2020-2021 Oregon Boys Basketball Gatorade Player of the Year and Portland Interscholastic League Player of the Year where he averaged a double-double with 31.2 points, 10.3 rebounds and 5.1 assists per game as a junior.

In November, Washington listed his top five schools in which he was considering playing basketball, which included Auburn, Oregon State, Texas, Texas Tech and Washington State.