Buccaneers win in a blowout 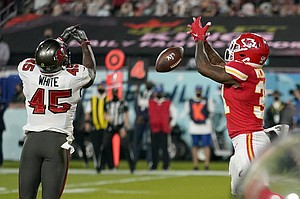 (AP) — Tom Brady put together another vintage performance on football’s biggest stage Sunday night delivering Tampa Bay to its second Lombardi Trophy, and first since 2003, with a 31-9 victory over Patrick Mohomes and the Kansas City Chiefs.

Brady, the Super Bowl’s MVP for the fifth time, and at age 43, was in control from beginning to end, going 21 of 29 for 201 yards with three touchdowns — all to some old buddies from his previous New England team — two to Rob Gronkowski and another to Antonio Brown.

By going 16 of 20 in the first half, Brady also added a record to his mile-long list as the first player in Super Bowl history to complete 80% of his passes and throw for three touchdowns in any half

Tampa Bay’s young defense also got a lot of credit.

Rookie safety Antoine Winfield Jr., and second-year linebacker Devin White had the team’s sixth and seventh interceptions of the postseason, and the Bucs limited Kansas City’s high-scoring offense to 350 yards and no touchdowns.

At 25 and coming off his first Super Bowl win, Mahomes had Chiefs fans thinking this would be the beginning of a dynasty. It still could be. But this year, Brady reminded everyone why he’s the undeniable standard at the position and in this game.