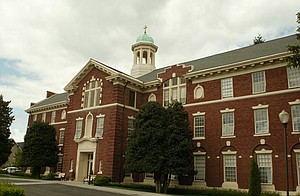 The Multnomah County Health Department on Monday urged residents of an affordable senior housing property in north Portland to leave their apartments after multiple people became ill with Legionnaires’ Disease. Four people have been hospitalized and one person has died, officials said.

The Health Department notified more than 100 residents at Rosemont Court, a historical property turned into apartments at 597 N. Dekum St, of concerns about the water system after multiple people became ill with pneumonia.

The Health Department said it is working with Northwest Housing Alternatives which owns Rosemont Court to temporarily relocate residents and ensure proper cleaning of the building plumbing system to remove any remaining Legionella bacteria.The bacteria is found naturally in fresh water, but can cause health problems if it gets into a building’s water supply.

Legionnaires’ Disease is not known to spread from person-to-person. And most healthy people exposed to Legionella do not get sick. But for people at increased risk, breathing in very small droplets of water with the bacteria can lead to severe pneumonia, officials said..

People at increased risk for infection include the elderly, smokers, those with chronic diseases such as COPD or diabetes, and the immunosuppressed. For those who get symptoms, the first to appear are usually flu-like (fever, tiredness, muscle aches, and headache). Signs of a serious Legionella lung infection (pneumonia) include cough and chest pain. Many people sick with Legionella also have diarrhea.

Legionella outbreaks have been rare in Multnomah County. The Communicable Disease investigations team identified the building’s water supply as the likely source by mid-afternoon on Sunday, Jan. 4. Within hours, officials said Multnomah County staff were preparing to voluntarily relocate people, and creating a plan with building managers from Income Property Management to treat the water system, including shutting off the water.

“This is a unique and concerning situation,” said Dr. Jennifer Vines, Multnomah County Health Officer, “and we are working with our partners as quickly as we can to determine if other properties or water sources are affected.”