Turns day of pageantry for Biden' win into deadly chaos 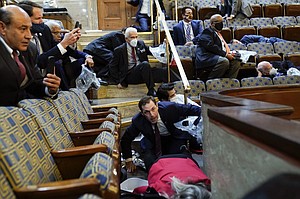 The National Guard and state and federal police were called in for control, and the mayor of Washington imposed a rare evening curfew. One woman was shot and killed by police, and three others died in apparent medical emergencies.

The protesters were egged on for weeks by Trump, who since the November presidential election had launched a barrage of false attacks on the integrity of the results. While rallying his supporters outside the White House Wednesday morning, he urged them to march to the Capitol. But later — hours after they fought police and breached the building — he told them in a video that although they were “very special people” and he backed their cause, they should “go home in peace.”

Even for a Capitol building that has seen centuries of protests and even violence — including a 1954 shooting involving Puerto Rican nationalists — Wednesday’s events were astounding because they appeared to unfold at least initially with the blessing of the president and also because of the underlying goal of overturning the results of a lawful presidential election.

The chaotic protests halted Congress’ constitutionally mandated counting of the Electoral College results, in which former Biden defeated Trump, 306-232. Republican Senate Majority Leader Mitch McConnell had tried to steer Congress away from Wednesday’s formal protest of those results, and he said at the start of proceedings that Trump had clearly lost.

In a raucous, out-of-control scene, protesters fought past police and breached the building, shouting and waving Trump and American flags as they marched through the halls. One person was reported shot at the Capitol, according to a person familiar with the situation. That person’s condition was unknown. At least one explosive device was found but law enforcement said it did not pose a threat.

More than a dozen people were arrested.

As darkness began to set in, law enforcement officials worked their way toward the protesters, using percussion grenades to try to clear the area around the Capitol. Big clouds of tear gas were visible. Police in full riot gear moved down the steps, clashing with demonstrators.

It added up a frightening scene for lawmakers, who were directed to take extraordinary action for their own safety. The protesters abruptly interrupted the congressional proceedings in an eerie scene that featured official warnings directing people to duck under their seats for cover and put on gas masks after tear gas was used in the Capitol Rotunda. Some House lawmakers tweeted they were sheltering in place in their offices.