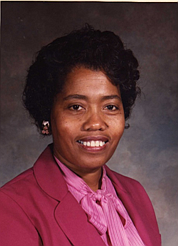 Missionary Green was educated in Perry, Okla., where prior to graduating from Blaine High School, her family moved to Imperial, Calif., and where she and her twin sister graduated from Central Union High School.

Missionary Green met her late husband, Rev. Selvester Green III, in Imperial, and they got married in the summer of 1956. With this union, they gave life to three children. Their first child, Ora Lelinna Green, was born in Calexico, Calif., the second, Sylvester Keith Green, was born in Port Wayne, Calif., and the third child, Kirk Lancent Green, was born in Long Beach, Calif.

During this time, Missionary Ora found work at Stacy’s Cleaners. Shortly after, she became the first Black controller at Stacy’s. In addition, she became the vice president of the Rose City M.M. Wives Association and Treasury.

Missionary Ora had a passion to teach and began working on her teaching degree with assistance from Mrs. Evelyn Collins who had started and operated a childcare center for working mothers. She found support for her continuing education at Humboldt and Applegate Elementary schools. In 1985, she graduated from Portland State University. Her teaching career began with assisting eductors at Portland Community College and the University of Portland until she received a permanent position as a full time teacher at Beaumont Elementary. After 45 years of teaching, she then retired and became a part-time teacher for every public elementary school in north, northeast and southeast Portland.

First Lady Ora dedicated her life to spreading the gospel from her first breath to her last. She was a volunteer for Meals on Wheels where the nonprofit thanked her for her service and honored her by including her portrait in Meals on Wheels billboards and delivery trucks.

She practiced what she preached, living on this earth as an angel. Ora was known as a natural leader in her community with an unwavering spirit. She also had a passion for history, community building and music. In order to fulfill her passions, she assisted Mrs. Clara Peoples with the Juneteenth festival from 1971 to 2019.

Some of her proudest moments were the birth of her children and watching them grow up and start their own families. She was also very proud with the arrival of each grandchild, great-grandchild and great-great grandchild. Ora loved to preach, travel, teach, and cook for her family. She was the anchor of the family and always brought them together to reminisce, laugh and enjoy one another’s company.